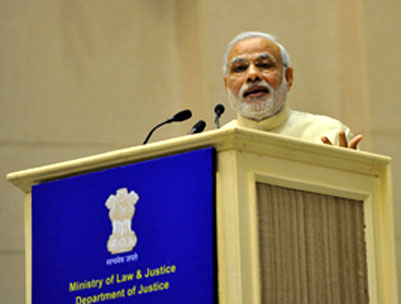 Odisha Channel Bureau New Delhi, April 5: Prime Minister Narendra Modi today said the judiciary should be both `Sashakt and `Samarth’ (empowered and capable) to play its `divine role’ of ensuring the rule of law, and delivering justice to the common man.Addressing the Joint Conference of Chief Justices of States and Chief Justices of High Courts, the Prime Minister said that while the executive is under constant assessment and scrutiny in public life, through various institutions, the Judiciary normally does not face any such scrutiny.Modi said the judiciary has built up an enormous faith and reputation among the people of India, and should evolve its own in-built systems for self-assessment, so that it can live up to the high expectations placed on it by the people.He said good infrastructure for the judiciary was a priority for the Government, and an amount of Rs.9749 crore had been earmarked for strengthening the Judiciary under the 14th Finance Commission.The Prime Minister said that under the Digital India Programme, technology should be deployed to bring about a qualititative change in the Judiciary.Modi He stressed that quality manpower was required for the Judiciary.He was as concerned about the human resource, as he was about the physical infrastructure, he added.Without going into the details of pendency in litigation and corruption in the Judiciary, the Prime Minister hoped that this forum would suggest some fresh approaches to deal with these issues.He said Lok Adalats were an effective way of dispensing justice for the common man, and this mechanism should be strengthened further.Similarly, he stressed the importance of Family Courts.He also called for a comprehensive review of the system of Government-appointed Tribunals, to assess their efficacy and effectiveness.The Prime Minister said that laws are sometimes not drafted well, and therefore lead to multiple interpretations.He said there should be minimum grey areas, and therefore, drafting of laws requires special attention.Modi said he is committed to removal of obsolete laws.He stressed the need to prepare for emerging areas of litigation such as maritime law and cyber crime.He said acquaintance with forensic science is now a must for those associated with the legal profession.Chief Justice of India Justice H.L.Dattu and Union Minister for Law and Justice D.V.Sadananda Gowda were present on the occasion.