Odisha Channel Bureau Kendrapara, April 16: Two occult practitioners, including an ex-serviceman, were arrested today in connection with brutal murder of an 8-year-old boy as part of human sacrifice ritual on Tuesday in Gokhapada village under Marshaghai police station limits in Odisha’s Kendrapara district.Abinash Choudhury (47) who masterminded the child sacrifice was an ex-serviceman.He was arrested along with his accomplice Das (52), police said.The occult practitioners confessed to the crime and revealed to have killed the boy to attain super natural powers.The assailants had slit the throat of the victim by a sharp edged knife.The duo picked up the victim as a soft target for the ritual as they had acquaintance with his family. 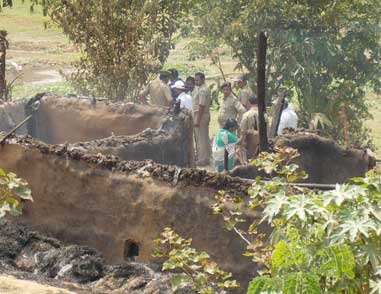 On some pretext, they called him to a deserted place near the riverbed and the unsuspecting child had fallen prey to their devious ploy, said Kendrapara Superintendent of Police Satish Kumar Gajaviye.After killing the victim, they collected the human blood to use it later in sacrifice ritual.Ex-serviceman Choudhury, a married man and father of two children, had taken to occult practice after having retired from army job.Police stumbled upon books on tantric cult during search of his house.Neither his spouse nor the children were aware of Choudhury’s black magic practice, police said.The assailants booked under IPC sections 302 and 34 were later remanded to jail custody following rejection of their bail plea in the local court.The blood-stained body of 4th standard student Rajesh Nayak with his neck slit had been retrieved on the Luna riverbed on Tuesday evening.Angry people had retaliated yesterday and had set afire the house of one of the occult practitioners.Tension continues to prevail in the village as locals are deeply shocked over the brutality of the murder of an innocent boy.Armed police deployment has been clamped in the village to prevent possible breach of law and order situation.This is for the first time that human sacrifice ritual-related murder has been reported in this coastal district.People in these parts of the State do not repose faith on traditional healers, witch doctors and black magicians.Tension had mounted up in Gokhapada village since Wednesday as angry people retaliated and set afire the house of one of the accused earlier detained by police, prompting the authorities to beef up security.