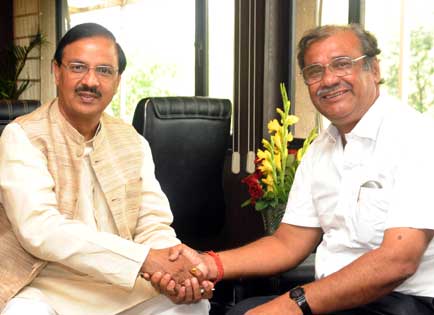 Odisha Channel Bureau New Delhi, April 21: Tourism and Culture Minister of Odisha Ashok Chandra Panda met Union Minister of State for Culture, Tourism and Civil Aviation Mahesh Sharma here today and sought the Centre’s assistance to promote tourism and culture in the State.Panda briefed the Minister about the potential for giving boost to tourism in the state by promoting the rich cultural heritage of the State and improving connectivity.He also sought help from the Union Tourism and Culture Minister to set up a Tagore Cultural Complex, Odisha Dance Museum in memory of Guru Kelucharan Mahapatra, and also setting up an International Museum at Puri.He further requested the release of funds worth Rs.8 crore for 8 Projects for which utilization certificates have already been sent to the Union Ministry of Tourism.Some of these important projects include development of Buddhist Circuit, Silk Route and development of Golden Triangle among others.Panda said that connectivity is an important factor to facilitate the growth of tourism to a destination.Although Bhubaneswar was declared an International Airport in 2013 and has a new state of the art terminal, there is no International flight from the Airport till date, he said.The Minister requested that International carriers be allowed to operate from Bhubaneswar Airport and as well as Air India should also operate an international flight from there.Sharma appreciated the efforts being made by the State of Odisha to promote culture and tourism and generate employment and income for the local people.The Union Minister said that the demands of the state are genuine and assured all possible help of the Central Government to the State of Odisha.