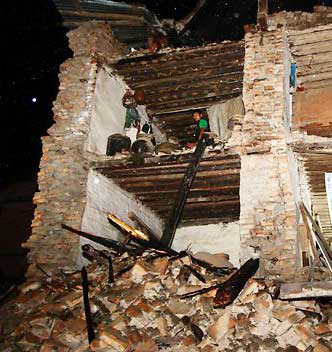 Odisha Channel Bureau Kendrapara, April 30: Some of the survivors from quake-hit Nepal are back to their homes in Odisha’s Kendrapara district recounting the horrific ordeal that they encountered in the ravaged Himalayan Kingdom.Around 20 persons, most of them plumbers, have returned to their respective ancestral villages in Kendrapara district till Thursday.An estimated 500 people from Kendrapara are reported to have been stranded in Nepal.All of them are stated to be safe.The administration is in constant touch with their family members.The list of stranded people has been dispatched to Odisha government’s resident commissioner posted at New Delhi for their evacuation at the earliest, said Kendrapara Collector, Debraj Senapati.For all the returnees, it’s a new lease of life.They never thought that they will ever be in homely comfort amid the loved ones.Seeing the death from almost handshake distance, the lucky survivors narrate the harrowing tales of death, destruction.Working as a teacher in Nepal’s Lalitpur, 35-year-old Prasant Samal was witness to falling down of the Indian embassy in Kathmandu.“I had been to Kathmandu for official work in the embassy.Quake struck when I was about to enter into the embassy.The earth shook violently.Before I could realize what was happening, I fell down.After I got up, I saw the crumbling structure of the embassy.Buildings were falling apart.It was chaos all around.Heart-wrenching scream and yelling of people seemed like a scene of Hollywood movie.Death and destruction unfolded in its worst form within few minutes.It was the worst nightmare of my life”, Samal recounted.Things are chaotic in Kathmandu.For almost 24 hours, people were left to fend themselves without food and water.Small pouches of water were sold at Rs 50.A pack of 50 gm biscuit cost me Rs 50 also.Devastation is very severe.Reconstructing Nepal would be a herculean task unless worldwide assistance pours in, he concluded.Experience of Khirod Sethy of Alapua was more or the same.“I was saved as I was in outdoors on the black Saturday.I was on the job as a plumber at a construction site in the Kathmandu valley when the tragedy befell.I have seen people trapped in debris and dying.I had seen a three-storied building falling apart”.