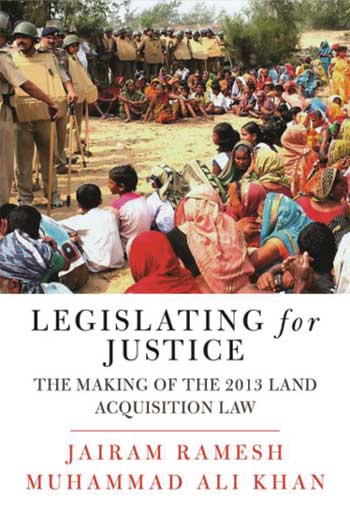 Odisha Channel Bureau New Delhi, May 2: A firsthand account of the challenges involved in framing new land acquisition law and the factors that drove the decisions has been published in a new book, `Legislating for Justice, The Making of the 2013 Land Acquisition Law’ co-authored by senior Congress leader and former Union Minister Jairam Ramesh with Muhammad Ali Khan.`Legislating for Justice’, published by the Oxford University of Press (OUP), attempts to explain the rationale employed behind the new law.The book highlights the challenges faced by the framers and the competing interests that had to be balanced in this historic and landmark enterprise, and also highlights the deficits that still affect India’s land rights jurisprudence.The book attempts to explain the rationale behind each and every provision of The Right to Fair Compensation and Transparency in Land Acquisition, Rehabilitation and Resettlement Act 2013, presented by the then minister of rural development and his principal aide.The book is a first-hand account of the challenges faced and the factors that drove the decisions in regulating the State’s approach to a resource that is arguably the most important in a land-deficit people-surplus nation.The book has been priced at Rs.495.About the authorsJairam Ramesh is Chair of the Future Earth Engagement committee, a research platform on global sustainability.Formerly he was the Minister of Rural Development and Minister of State (Independent Charge) of Environment and Forests, Government of India.He is also a member of the Rajya Sabha, the Upper House of the Parliament of India.Muhammad Ali Khan is an advocate practicing in the Supreme Court of India.He was formerly the Officer on Special Duty to the Minister for Rural Development in the Government of India, Prior to that he worked as an Aide to Jairam Ramesh in the Ministry of Environment and Forests.He began his career working with the litigation team of Amarchand and Mangaldas, a premier Indian law firm.The former Union Minister had recently written another book titled `Green Signals: Ecology, Growth, and Democracy in India.The book published in February this year chronicles the ‘1991 moment’ in India’s environmental decision-making, telling the story of how, for the first time, the doors of the environment ministry were opened to voices, hitherto unheard, into the policy-making process.