Operation to flush out Maoists begins in Angul 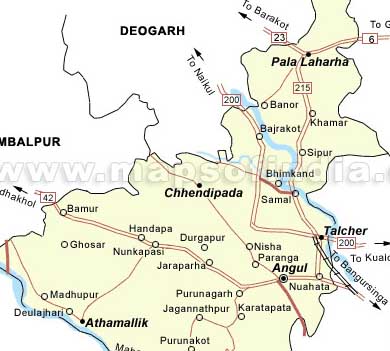 Odisha Channel Bureau Angul, June 5: Intense combing operations by platoons of Special Operation Group is on in forest areas close to Satkosia wildlife sanctuary to flush out armed Maoist cadres sighted by local villagers.The forest areas are Laxmipur and Anthulia, which close to Satkosia forest areasHowever, district police authorities are reluctant to provide details of the operations on the ground of hampering the operation.Senior police officials have rushed to the spot.Despite police claim of checking Maoist advance into industrial Angul district, armed Mao cadres were repeatedly spotted by the locals at Laxmipur forest some months ago forcing police to launch combing operations.Laxmipur is about 80 km away from Angul town.There was also an encounter between police and Maoists last year in a jungle under Chhendipada police station.No one was either injured or killed but police had recovered some Maoist literatures from the spot.But to the worry of the police some armed Maoist cadres were seen inside Antulia jungle by the locals yesterday.Antulia forest is very close to Satkosia wild life sanctuary.“We about six villagers of Antulia went to our forest to collect woods on Thursday .at about noon when reached near the hill, about six armed men came to us .They enquired about us and our village and also our localities.They warned not to disclose their presence to anybody before they melted away deep into the forest.They were speaking in Hindi and western Odisha dialect,” said a resident of Antulia villager.