Rajkumar MohantyPuri, June 5: The Antah Banajag began as the Daitapatis on the Friday night shifted the four Neem tree trunks (Darus) from the Daru Gruha to the construction yard in the Koili Baikuntha.Today morning the Gajapati Dibyasingha Dev as per the tradition in a formal ceremony at his palace handed over “Gua”, the holy Betel nut to the Purohit the chief of the Shrotriya Brahmins through the Rajguru to conduct the Yajna at the Koili Baikuntha close to the Daru construction site. 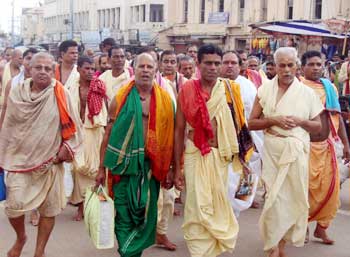 As many 75 Shrotriya Brahmins would concertedly participate in the Yajna which would continue till end of the construction of the images of the deities on the Darus and Purnahuti would be offered by the Gajapati King on June 15, the Chaturdashi Tithi.During these Anasar days ten Biswakarmas under the instruction of senior Daitapatis would carve out images of all four deities on the four Darus and place the new idols facing the old ones in the Anasar Gruha.On the midnight of June 15 senior Daitapatis would transfer the holy Brahmas from the old to the new idols, while the old idols would be buried in the Koili Baikuntha.The deities in their new bodies would appear for public darshan a day prior to the annual Rath Yatra scheduled for July 18.