Odisha Channel Bureau
BHUBANESWAR: Pratap Kishore Panda, Director of Panda Infraprojects (India) Private Limited, the city-based construction company engaged in construction of the flyover that collapsed in Bomikhal area of the city on Sunday, was arrested on Monday. 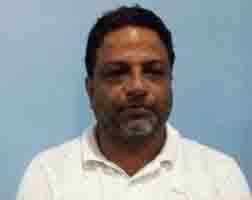 Panda was arrested under Sections 304,337, 338 and 34 of IPC soon after he surrendered before the city Deputy Commissioner of Police Satyabrata Bhoi.

The accused surrendered after the police registered a case and sealed the office of the construction company located near Vivekananda Marg in Old Town area of the city.

Sujata Panda, another Director of the company, and two engineers working with the Works Department of Odisha government overseeing the flyover project have also been named as accused in the case.

One of the accused engineers Bansidhar Praharaj was also arrested earlier in the day. Police are continuing with their investigation and looking for the other accused in the case.

The issue was also raised by opposition parties in the State Assembly during the when Chief Minister Naveen Patnaik made a statement saying that the State government will ensure that “stringent and exemplary action is taken against all persons responsible for this tragic incident”.

Meanwhile, a team of senior engineers visited the accident site where one person was killed at 11 were injured began a probe into the lapses in the implementation of the project.