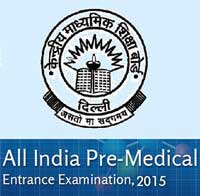 Odisha Channel Bureau New Delhi, June 15: Over six lakh students who had appeared in the All India Pre-Medical Test (AIPMT) 2015 on May 3 now have to re-appear in the test that would be re-conducted within four weeks as per the Supreme Court’s orders passed today.In its order passed today, the vacation Bench of the Supreme Court scrapped the All India Pre-Medical Entrance Test for 2015 and directed the Central Board of Secondary Education (CBSE) to re-conduct test within four weeks.The apex court Bench had reserved its verdict on Friday on petitions seeking re-conduct of Pre-Medical Test 2015 for alleged large-scale irregularities in the examination held in May.The alleged irregularities in the AIPMT examination were reported from Haryana.