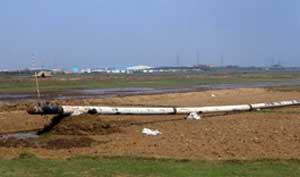 Since past fortnight, the pipe laying work has come to a grinding halt even as the landowners from Fatehpur village near Paradip staged dharna seeking revised compensation and employment avenues to them.“Significantly, the pipeline project work is bereft of protest in other places like Puri, Angul, Dhenkanal, Jharsuguda and Sambalpur districts.In Erasama area of Jagatsinghpur district also, landowners have cooperated with the company for pipeline laying work. “People’s demands for revised compensation are unreasonable.The pipeline work is a major national project which is covering Odisha, Chhattisgarh and Jharkhand.“Resorting to agitation and stalling the project work is unlawful.The administration would be forced to take recourse to coercive action if the agitating people do not relent,” officials said.The pipeline that is being laid would evacuate petroleum products from IOCL’s under-construction refinery at Paradip to Ranchi and Raipur.As per the IOCL plan, about two million tonne per annum of motor spirit, kerosene and high speed diesel is expected to be evacuated through the proposed 1108-km pipeline.The pipeline is stretched across an estimated 500 KM across the state of Odisha.“We are not opposed to the pipeline project.Our prayer is for revision of compensation sum.The company is paying us Rs 11.57 lakh compensation against an acre of land.The price should be adequately hiked.The oil company has barred the landowners from carrying out permanent construction activity over the patch of land where underground pipeline would traverse through.That implies that people are losing land for all practical purpose.Therefore people are seeking land-losers’ status that entitles them to rehabilitation cover,” said Sangram Kishore Routray, an office bearer of Maa Barunai Krushak Ekata Manch, an outfit espousing the cause of landowners.