Malay MohapatraKeonjhar, July 15: Nine accused have been arrested for hacking to death six members of a family at Lahanda village under Joda police station in Odisha’s Keonjhar district on Sunday night. 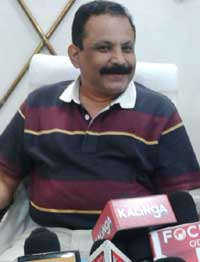 The accused had attacked the family under the superstitious belief that the head of the victim family was practicing witchcraft. The arrested persons are Tambha Munda, Painu Munda, Pandri Munda, Bagun Munda, Mansingh Munda, Iswar Munda, Mana Munda, Deepa Munda and Siba Munda.All the accused have been forwarded to the court, according to Bijay Kumar Sharma, Additional Director General of Crime Branch of Odisha police.Addressing journalists at Keonjhar, Sharma said that the accused involved in the heinous killing of Gura Munda’s family have been arrested under Sections 542,302,307 and 34 of IPC.The accused persons, led by Tambha Munda had murdered six members of Gura Munda’s family and injured two other children suspecting witchcraft.Tambha Munda happened to be Gura Munda’s elder brother.The Crime Branch of Odisha police is investigating into the case that has shocked the people in the State.