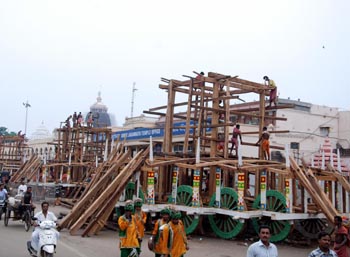 Odisha Channel Bureau Bhubaneswar, June 23: The nine-day-long annual Rath Yatra of Lord Jagannath may not pass off peacefully this year if the difference of opinion between Puri Shankaracharya and the Daitapati servitors was not sorted out soon.The differences between the Daitapatis and the other servitors of Lord Jagannath came out in the open before Chief Minister Naveen Patnaik when he reviewed the Rath Yatra preparations at a high level meeting in Puri on Sunday.Patnaik remained silent when the agitated Daitapati priests expressed their anger over the Shankaracharya’s views that the devotees should not be allowed to climb the chariots of the deities during the Rath Yatra.The Cabinet colleagues of Patnaik were seen pacifying the warring factions of the priests who attended the review meeting, and the Daitapatis sought a clarification as to who will identify those to be allowed to climb the chariots during the car festival.Normalcy was restored at the meeting after State Law Minister Arun Sahoo assured that a meeting will be held on June 24 to discuss about the rights of those persons who would be allowed to climb the chariots in view of the High Court order.This is for the first time that the Naveen Patnaik Government has landed up in the midst of controversy over the devotees climbing the chariots and touching the deities.While disposing off two public interest petitions on June 20, the High Court of Orissa had ordered that the Shankaracharya’s opinion that the devotees will not be allowed to climb the chariots during the Rath Yatra in Puri will prevail.“Any contrary opinion of the State Government will obviously be in-operative.The State Government may however perform its duty of maintaining law and order and providing all necessary assistance for smooth conduct of the car festival in accordance with the decision of the Managing Committee on the issue of rituals which is based on opinion of HH Shankaracharya, Puri and correctness of which is neither subject matter for consideration of State Government nor before this Court,” a Division Bench of the Court comprising Chief Justice A.K.Goel and Justice A.K.Rath said in its order.Though all parties involved had agreed to accept the court orders, the resentment among the Daitapatis over the Shankaracharya’s recommendations had come under criticism again in the review meeting on Sunday.