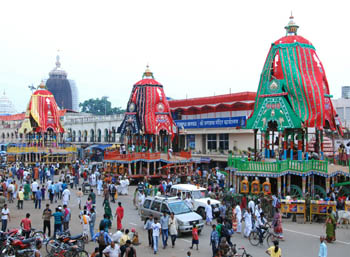 Odisha Channel Bureau Puri/Bhubaneswar, June 29: The process for the annual Rath Yatra (car festival) of Lord Jagannath began in the holy town of Puri and hundreds of other places across Odisha on Sunday morning.Even as the controversy over devotees climbing the chariots continued to cast its shadow over the Rath Yatra with Shankaracharya Nischalananda Saraswati refusing to climb the chariots, the rituals connected with the Rath Yatra were being performed by the servitors concerned at least two hours behind the schedule.The administration was taking all measures to implement the High Court order which upheld the suggestion of the Shankaracharya that devotees will not be allowed to climb the chariots during the nine-day-long festival.The Shankaracharya had refused to climb the chariots since he had been asked to come alone.He said that he had been hurt over the manner in which the Odisha Government handled the controversy.Meanwhile, lakhs of devotees have arrived in Puri witness Lord Jagannath, Lord Balabhadra and Devi Subhadra on the Grand Road during the pulling of the chariots in the afternoon when the deities would go on their annual sojourn to their aunt’s house Mausima Temple at the other end of the Grand Road.More than 10 lakh people were likely to witness the Rath Yatra in Puri.The administration has taken all possible measures for the smooth conduct of festival.Elaborate security arrangements have been made in Puri to make the Rath Yatra incident-free.More than 100 platoons of police and security personnel have been deployed in and around Puri town to maintain law and order during the Yatra.The well-decorated chariots – Taladhwaja of Lord Balabhadra, Nandighosha of Lord Jagannath and Darpadalana of Devi Subhadra – have been properly positioned before the Sri Jagannath temple.The Pahandi procession to bring the deities from the main temple to the chariots was scheduled to begin at 9 am.The pulling was the chariots will begin the afternoon after Maharaja Dibyasingha Deb performs the Chhera Pahanra on the chariots.A Rath Yatra was being telecast live by a number of television channels, including Doordarshan.On the other hand, people across Odisha were ready to celebrate Rath Yatra at various places across Odisha and outside.Apart from Puri, the other towns where Rath Yatra was scheduled to be celebrated in a grand way include Jagannath temple at Sabar Srikshetra in Koraput, Tulasi Kshetra Baladevjew temple in Kendrapara, ISKCON temple in Bhubaneswar and other towns such as Keonjhar, Ganjam, Khurdha, Cuttack, Sambalpur, Subarnapur.Rath Yatra celebrations were being organised at as many as 1638 places across Odisha.Rath Yatra will also be organised at the Jagannath temple at Hauz Khas in New Delhi and the Jagannath temple at Ahmadabad in Gujarat.The car festival was also scheduled to be celebrated in many others States of India such as Andhra Pradesh, Arunachal Pradesh, Assam, Bihar, Chhattisgarh, Goa, Himachal Pradesh, Tamil Nadu, Haryana, Jammu and Kashmir, Jharkhand, Karnataka, Kerala, Madhya Pradesh, Manipur, Mizoram, Punjab, Sikkim, Rajasthan, Tripura, Uttarakhand, Uttar Pradesh, West Bengal and Maharashtra.The Rath Yatra is also being celebrated by the Odia people living in countries such as United States of America, United Kingdom, Canada, Germany, France, Africa, West Indies, Sri Lanka, Myanmar, Bangladesh, Mauritius, Indonesia, Russia, Nepal, Japan, Belgium, Netherlands, Kenya, Malaysia, Spain, Sweden, Switzerland, Hungary and Bulgaria.