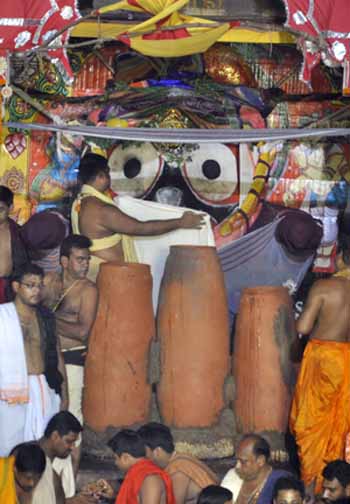 Odisha Channel Bureau Puri, July 9: Lord Jagannath, Lord Balabhadra and Devi Subhadra were offered Adhar Pana, a rich drink, on Wednesday night.Today the temple servitors placed nine large open mouth barrel shaped pitchers with one meter height full of holy drinks before the three deities on their respective chariots.The pitchers were placed touching the lips (adhar) of the deities popularly called as Adhar Pana.These drinks were provided by many mutts entrusted by the erstwhile Kings.After observance of Sodosha Upachar Pooja by the temple priest simultaneously on the three chariots late in the night, special set of servitors smash these earthen pots chariots spilling the entire drink on the floor of the decks.It is believed that numerous spirits, ghostly bodies and souls trail the deities during the Rath Yatra keeping a close vigil on this event to get Mokshya by tasting the holy drink.A large number of devotees too jostled with pots in hands under the belly of the chariots to gather the spill.The deities would remain on the chariots tonight and would enter into the main temple sanctum sanctorum on Thursday night in ceremonial Pahandi procession to be conducted by the Daita servitors.Before entering into the temple the deities would be offered Rasagola bhog on the chariots.