Odisha Channel Bureau Bhubaneswar, June 28: Controversy over the issue of climbing and touching the deities atop the three chariots of Lord Jagannath, Lord Balabhadra and Devi Subhadra continues to persist even as the Rath Yatra was to start a few hours away in Odisha’s coastal town Puri.The Daitapati servitors, who were still unhappy over the Shankaracharya’s suggestion not to allow devotees to climb the chariots during the nine-day-long Rath Yatra festival, have agreed to abide by the suggestion during the current Rath Yatra that begins on Sunday.They, however, have announced that they would challenge the recent Orissa High Court order upholding the views of the Shankaracharya in the High Court after the car festival was over.This has made it clear that the issue of dividing people on the lines of devotees and non-devotees is not going to get resolved in the near future. 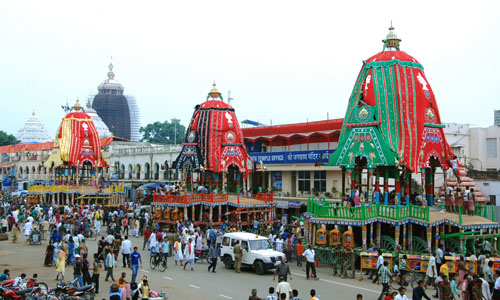 Designated Special Officer for Rath Yatra Suresh Mohapatra has told media-persons that the Daitapatis have agreed to cooperate with the temple management committee for the smooth conduct of the Yatra without further raising a banner of protest against the High Court order.Mohapatra said after holding a high level meeting and interacting with the Daitapati servitors on Friday night in Puri that the State Government on Friday agreed to fulfill demand of Daitapati priests, seeking compensation for the loss they would incur due to restriction on devotees climbing the chariots and touching the deities.The controversy over the devotees climbing the chariots was likely to affect the Rath Yatra festival being organised in other parts of Odisha and rest of the places across the world.It is because there was confusion among the organizers whether the same suggestion of Shankaracharya should be followed by them or not.Meanwhile, Shankaracharya on Saturday requested the Naveen Patnaik Government to make security arrangements during his customary visit to the chariots, apparently anticipating trouble from a section of the servitors who were aggrieved over his decision.While one section of the people was supporting the stand of Shankaracharya, another section was questioning his right to climb the chariots and supporting the view that the devotees be allowed to climb the chariots.The State Government promptly responded to the Shankaracharya’s demand and said it would take appropriate steps.The Shankaracharya had got involved in the controversy after he gave his suggestions and views about devotees climbing the chariots during the festival.He had given his views after the Jagannath Temple Managing Committee had sought his opinion on the controversial issue last year.The issue had come to focus after noted Odissi dancer complained about misbehavior of the Daitapati servitors during climbing the chariots during last year’s Rath Yatra.Many devotees feel that the controversy over devotees climbing chariots should not be made an issue involving religious sentiments and there should not be any discrimination on any line.