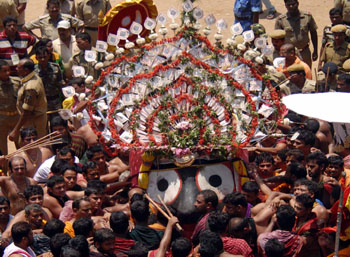 Odisha Channel Bureau Puri, July7: Over eight lakh devotees mostly from nearby villages participated in the Bahuda Yatra (return car festival) of Lord Jagannath and smoothly veered the three chariots one after another on the Grand Road here on Monday.As per the tradition while the devotees from far and distant places participate in the beginning day of the Rath Yatra, the locals and devotees of nearby villages conduct the Bahuda.The deities return to the main temple after a nine day sojourn to their aunt’s house.Devotees were waiting since morning at the exit gate of the Gundicha temple, Nakchanadwar to witness the ceremonial pahandi of the holy triads.As soon as the deities came out, with Lord Balabhadra first then Devi Subhadra and at the end came Lord Jagannath the air was rented with Jai Jagannath, Haribol and Huluhuli.Lord Jagannath coming to his chariot Nandighosha with giant tiara atop his head swinging in a majestic way was a treat for the eyes of the devotees.The Pahandi was advanced by about one hour than the scheduled time.The daita servitors remained busy entire night preparing the deities for the tedious Monday journey.For that they fashioned special body armor to the deities called Chhenapatta.After observance of a complex set of rituals such as Suryapooja, Mangal Aarati, Mailam, Abakash the deities were offered Khichidi Bhog before the Pahandi began.The temple and district administrations and the concerned servitors geared up for timely observance of nitees and rituals to effectuate early pulling of the chariots so that they reach their destination on Monday to facilitate Suna Besha scheduled for Tuesday.The Pahandi which began by 10.30 am was completed by 1pm.Chherapahanra by the Gajapati Dibyasingha Deb was completed by 2.25 pm.The devotees pulled the chariots along the three km long Badadanda to the main temple front parking area.Nandighosha reached the main temple at about 7.25 pm.On the way the deities tasted Podapitha baked by their maternal aunt Mausima and then Gajapati near his palace conducted the Laxminarayan Bheta before the chariots were veered to their final parking lot.