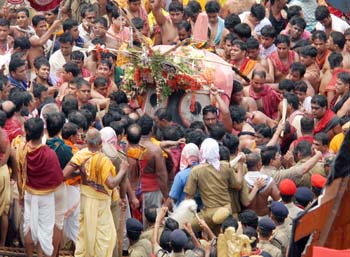 Odisha Channel Bureau Puri, June 29: The world famous Rath Yatra of Lord Jagannath was held in Puri without Shankaracharya of Gobardhan Peeth Nisachalananda Saraswati paying the customary visit to the venue and worshiping the deities atop the chariots on Sunday afternoon.The pulling of the chariots started with the devotees first pulling the Taladhwaja chariot of Lord Balabhadra a little before 4 pm by holding the long ropes attached to it.The two other chariots Darpadalana of Devi Subhadra and Nandighosa of Lord Jagannath were pulled in a similar manner later.The chariots pulling started after Maharaja Dibyasingha Deb performed Chhera Pahanra ritual of cleaning the three chariots.The Shankaracharya, however, stayed away from visiting the chariots before the Chhera Pahanra ritual since was unhappy over the manner in which he was invited to the Yatra venue.Though the rituals were performed two hours behind the schedule, the Temple Administration officials were hopeful that the chariots will reach their destination outside Gundicha temple at the end of the Badadanda (Grand Road).Odisha Governor S.C.Jamir, Chief Minister Naveen Patnaik and a host of other dignitaries were present on the Grand Road to witness the pulling of the chariots.Saraswati was aggrieved since Saturday after the Sri Jagannath Temple Administration invited him to climb the chariots alone without being accompanied by his disciples.Two BJP leaders of Odisha – Union Petroleum Minister Dharmendra Pradhan and Union Tribal Affairs Minister Jual Oram – met the Shankaracharya at Gobardhan Peeth in Puri earlier in the day and discussed about the issue.Both the Ministers said that Chief Minister Naveen Patnaik should intervene in the matter.On the other hand, Odisha unit of the Vishwa Hindu Parishad said in a statement that the administration should refrain from creating an embarrassing situation for the Shankaracharya.Rashtriya Swayamsevak Sangha Odisha chapter said that the administration should apologize to the Shankaracharya.Meanwhile, Prime Minister Narendra Modi greeted the people on the occasion of Rath Yatra, which was being held across the country.More than 10 lakh people from different parts of the world attended the Rath Yatra in Puri.Adequate security arrangements were made to make the incident trouble-free.The Yatra was also celebrated across Odisha and other parts of the country and the world. 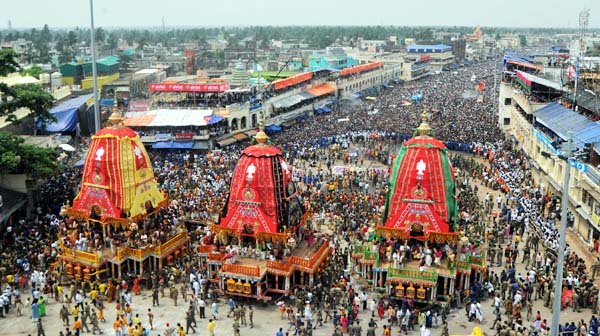