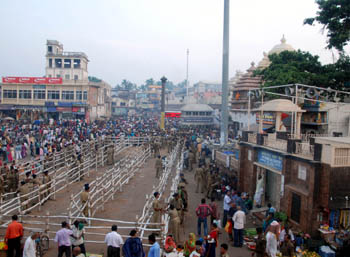 By Rajkumar MohantyPuri, June 26: Unprecedented security arrangements were being made for the annual Rath Yatra of Lord Jagannath scheduled to be held in Puri on June 29.Lord Jagannath, Lord Balabhadra and Devi Subhadra would go on a nine-day sojourn at Gundicha temple by riding three gigantic chariots.For that 115 platoons of Armed police, 1000 police officers of various ranks, 2000 home guards, two companies of Rapid Action Force and several units of tactical units would be deployed for smooth conduct of the Rath Yatra, said R.P.Koche, Inspector General Police on Thursday.He further told journalists that several teams of bomb detection and disposal units and Special Operation Group personnel would be pressed into service.This apart contingency plans have been chalked out for any emergency.Vessels and choppers of Coast Guard would patrol the coast area.Three hundred trained Nolias (life guards) would be deployed along the beach to prevent drowning of pilgrims in sea.CCTV cameras have been installed at 21 locations along the Badadanda (Grand Road) and other strategic places of the road and other pilgrim congregation areas and experienced police officers would monitor visuals from Town police station control room.A number of police check posts would operate along Puri–Bhubaneswar; Puri-Brahmagiri; and Puri-Konark routes informed Koche.Gyanaranjan Mahapatra, DSP in charge of the traffic arrangements, presented the detailed planning of crowd control during the car festival.Badadanda, the venue of the fete, has been divided into 14 sectors and the pilgrim crowd would be diverted from the regular routes to other roads to lessen the load from the Simhadwar.Heavy barricading would be put in place to prevent the crowd getting close to the three chariots of the deities.One extra cordon rope would be added to the existing two to strengthen the security ring around the chariots.Fifty-five platoons of armed police would be deployed for the three chariots during the pulling.One way route would be enforced on Rath Yatra, Bahuda (return car festival) and Suna Besha day.While all the vehicles would be allowed to enter the city through Puri- Bhubaneswar NH-203 they would be allowed to return through Puri Konark-Pipili or via Niali routes, Koche informed.Director General of Police Prakash Mishra along with Special Director General of Police Sanjib Marik and other senior officers had assessed the security arrangements on Wednesday.