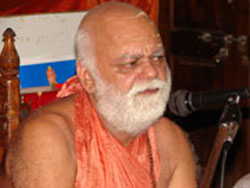 Odisha Channel Bureau Puri/Bhubaneswar, June 29: Politics began over the annual world famous Rath Yatra of Lord Jagannath in Odisha’s holy town of Puri on Sunday with two Union Ministers meeting the Shankaracharya of Gobardhan Peeth even as Pahandi procession of the deities came to an end on the Grand Road and the Yatra was in progress.The chariots were to be pulled by the lakhs of devotees who had converged at the venue of the Yatra after Gajapati Maharaja Dibyasingha Deb performs the Chhera Pahanra ritual cleaning the three chariots of Lord Jagannath, Lord Balabhadra and Devi Subhadra.While Bharatiya Janata Party leader from Odisha and Union Petroleum Minister Dharmendra Pradhan called on the Shankaracharya and held discussions with him for nearly an hour in the morning, prominent tribal leader of BJP in the State and Union Tribal Affairs Minister Jual Oram met the sheer afterwards.While Pradhan said that Chief Minister Naveen Patnaik should intervene in the matter to resolve the controversy over Shankaracharya’s refusal to visit the chariots before they were pulled from Sri Jagannath temple to Gundicha temple.Oram told journalists after meeting the Shankaracharya Nischalananda Saraswati that he tried to persuade the sheer not to boycott avoid his customary rituals under which he visits the deities atop the chariots on the Rath Yatra day.Shankaracharya was aggrieved after the Sri Jagannath Temple Administration on Saturday asked him to climb the chariots alone without his disciples.The Temple Administration had invited the Shankaracharya to visit the deities on the chariots alone in view of the Orissa High Court order with regard to the controversy of the devotees climbing the chariots.The court had ordered a few days ago that the Temple Management Committee should go by the Shankaracharya’s recommendation that the devotees will not be allowed to climb the chariots and touch the deities.While the Shankaracharya was against the devotees climbing the chariots, the Daitapati servitors had opposed his views.They, however, had agreed to cooperate and help the administration work as per the High Court order to ensure smooth conduct of the Yatra.Meanwhile, celebration of Rath Yatra continued in Puri as well as hundreds of other places in Odisha and other parts of the country and abroad.