Odisha Channel Bureau Bhubaneswar, Aug 17: Odisha Pradesh Congress Committee staged a massive demonstration outside the Raj Bhavan here today demanding resignation of Chief Minister Naveen Patnaik for misuse of the police by his government in the recent months, particularly in the recent incident at Kendrapara.The police barbarism in Odisha has crossed all limits and it is happening with the knowledge of the Chief Minister who holds the home portfolio exclusively, the Congress said in a memorandum submitted to Governor S.C.Jamir.“We are convinced that Government of Odisha has resorted to criminal misuse of power through the police force and abdicated its obligation for democratic and transparent governance in the matters stated above,” the party said in its memorandum. 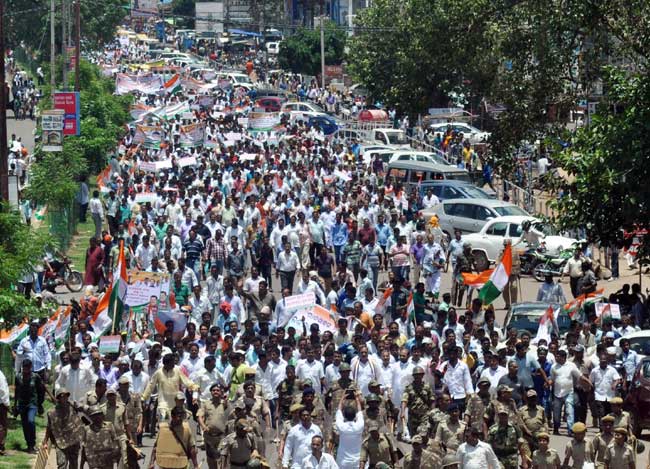 The memorandum was submitted to Jamir by a delegation led by OPCC president Prasad Harichandan.The delegation met the Governor after thousands of Congress leaders and workers marched from Congress Bhavan to Raj Bhavan holding banners, placards and party flags in their hands.“It has come to the notice that under the patronage of the Chief Minister of Odisha, the ruling BJD leaders had created over the years a monster named Sarathi alias Santosh Roul, who brazenly betrayed the faith that he created among some people of the State by indulging in every possible kind of immoral, corrupt and criminal activities.His vast empire of ill-gotten land, building and wealth exceeding hundreds of crores of rupees is mostly enriched by the government funds granted and black money pumped by the Biju Janata Dal MLAs, MPs and leaders,” the party submitted in the memorandum.” “The nefarious activities of conman Sarathi were made public initially by the Congress MLA of Aul constituency through his representation to the Collector, Kendrapara.Subsequently the mass media exposed the sordid affairs of Sarathi which led to widespread unrest among the people.“In this scenario Satish Gajbhiye, the then Superintendent of Police, Kendrapara with nine platoons of police force attacked brutally the silent and peaceful protestors.He unleashed unimaginable torture on all where he did not even spare the school and college going students, government employees, advocates and patients.“Earlier, in the same Kendrapara district police had resorted to the worst kind of hooliganism through lathi-charge and firing at Namatara where people, mostly women, were grievously injured and hospitalised for protesting against an illicit liquor shop owned by a policeman.Similarly, the police had launched brutal atrocities on the people of Belabahali in Keonjhar district resulting in serious injuries to about 35 persons including women and children.At Kotagarh in Kandhamal district, the police turned a butcher by shooting dead an Adivasi couple at point blank range.“Satish Gajbhiye, for all his blatant violation of human rights in Kendrapara, was transferred from the post of Superintendent of Police to the police headquarters as an officer without duty.Subsequently, his suspension from service is merely superficial as he continues as officer without duty.His wife has purchased 60 acres of private land and encroached upon 70 acres of government land in 2012 and has developed a huge business of pisciculture.All this has been possible with active connivance of her husband Satish Gajbhiye who has concealed these ill-gotten properties from the government.“We demand dismissal and arrest of Satish Gajbhiye for his cognizable offence s and his dismissal from the service as he is unworthy of his position.” “We are convinced that Government of Odisha has resorted to criminal misuse of power through the police force and abdicated its obligation for democratic and transparent governance in the matters stated above,” the party said in its memorandum.“We therefore very strongly feel that the continuance of the Chief Minister in the office is not at all tenable either morally or constitutionally,” the party added.Rejecting the Crime Branch investigation into the whole incident for its “utter ineptitude in the chit fund and Ghangapatna land scam”, the party urged the Governor “for direction to the State government for initiating either a CBI inquiry or a High Court monitored special investigation of the whole sordid episode and implore appropriate action against all the concerned criminals who have plundered faith and wealth of the people”.