Odisha Channel Bureau New Delhi, Aug 18: Union Minister of Women & Child Development Maneka Sanjay Gandhi has asked the States to take stringent action against those child care institutions which are not abiding by the rules, take penal action against them under illegal detention of children or illegal confinement of children and transfer the children in these institutions to nearby specialised adoption agencies.She was addressing the representatives of Women and Child Development Departments from the States at the ‘National Familiarization Programme for States/UTs on New Adoption Guidelines’ in New Delhi today. 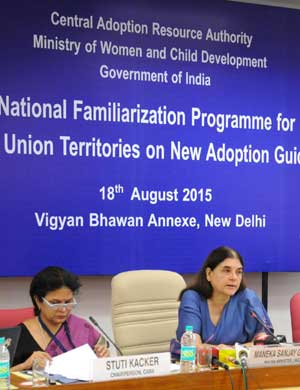 “Though the current Juvenile Justice Act, 2000 does not propose any penal provision for violation of non-registration of child care institutions, we may proactively identify such institutions and by clubbing the section of JJ Act prescribing mandatory registration (Section 34) and sections of IPC of illegal detention in unauthorized premises, a criminal case can be initiated against such agencies for illegal detainment or confinement of children.Your proactive stringent action against few such unauthorised agencies in your States will force all to comply”, the Minister said.Commenting on the reported rampant illegal adoption/child transfer from hospitals/maternity homes, IVF Centres, the Minister said such informal adoptions compromise the rights and safety of the children.However, this practice can be curbed by making them partners in our endeavour, she explained.Gandhi expressed regret that during the last three years, the number of adoptions has remained between 4000 – 5000, which is inexplicably low in comparison to the magnitude of children without parental care.It is shocking that there are less than 800 normal and almost equal number of special need adoptable children in 411 recognized adoption agencies in the country as on date, while there are almost 9000 parents registered to adopt a child, she added. The Minister said that the new guidelines have become operational and upgraded CARINGS has been launched to bring transparency into the adoption system, curb illegal adoption, malpractices, underhand unethical dealing by agencies and aimed to greatly increase the number of adoptions at least to 20000 by next year.However, for the new system to work effectively and show results, it is important to register all the Child Care Institutions, set up SAAs in each district, build the capacity of District Child Protection Units (DCPUs) and connect them to CARA, connect all SAAs mandatorily through internet to bring them online and States should proactively undertake multi-media campaigns to check illegal adoption and promote legal adoption, she said.