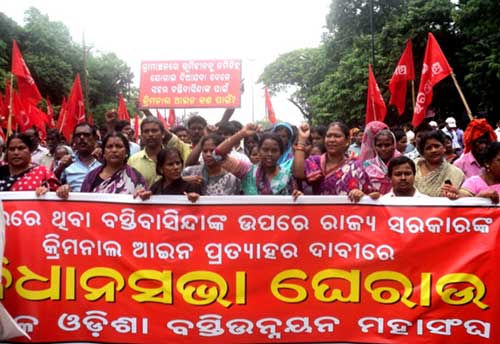 The protesters alleged that the ordinance would create a catastrophic situation for the poor marginalised who critically depend on the common (government) land.It is to be noted that on May 26 this year that the Naveen Patnaik Government promulgated the Odisha Land Grabbing (Prohibition) Ordinance, 2015for prohibition of grabbing of land owned by the government, local authority, public institutions, Bhoodan Yagna Samiti and religious or charitable institutions.The ordinance shall be applied to the all land situated within the limits of municipal corporation, municipalities, NAC, Development authorities constituted under the Odisha Development Authorities Act, 1982, Special planning authorities constituted under the Odisha Town planning and Improvement Trust act 1956 and land belonging to the government adjacent to national Highway and Sate Highway and to such other local authority, as the government may by notification specify. As per the Act land grabbing is now a cognisable offence with criminal liability and no person accused under the Ordinance shall be released on bail.This has a provision of imprisonment for one to seven years besides penalty against offenders.Besides, the ordinance proposes a special Court for speedy trial.The special Court will have the power of both Civil and Session’s Court and it would dispose the cases within six months.The protesters alleged that while the state government has utterly failed in regularising the Government lands occupied by the marginalized for their shelter and livelihood under the Odisha Prevention of Land Encroachment (OPLE) Act 1972 and the Odisha Government Land Settlement (OGLS) Act 1962 Odisha Land Reform Act 1960 over the period, the proposed eviction of the landless and homestead less people from the occupied land would be crime by the government.Besides, the Government of Odisha has failed to provide land to all the landless families despite ‘Vasundhara’ scheme and ‘Mo Jami Mo Diha Campaign’ lunched from last 2005-06.The demands made before the State government include;1. The definition of land grabber should exclude the land less and the marginalised communities who are staying or dependent on government land.2. The government should expedite the process of officially issue the pattas to the marginalised communities on their land within a stated time period.3. The PRI institutions should be taken into consideration in the matters dealing with land grabbing.4. The government should make appropriate amendment, though belated, to the old, outdated laws like OGLS Act, OPLE Act by the Assembly and Regulation 2 of 1956, by the Governor, and enact the new law in conformity with the basic principles of the Constitution and PESA Act.