PDS in Odisha to include edible oil, pulses: Padhi 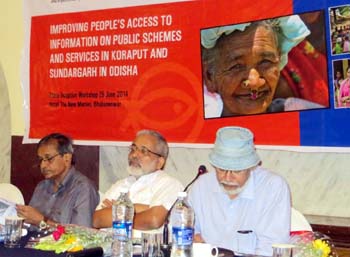 Odisha Channel Bureau Bhubaneswar, June 26: Odisha Government is thinking to expand the scope of the public distribution system and include edible oil and pulses, said Madhusudan Padhi, Commissioner-cum-Secretary, Food Supply and Consumer Welfare, Government of Odisha at the inception workshop of a project titled ‘Improving People’s Access to Information on Public Schemes and Services in Koraput and SundargarhPadhi made the announcement while addressing the workshop in Bhubaneswar on Wednesday.He further stated that if the number of rural people eligible to be covered under the Food Security Act exceeds the cut-off mark of 82 per cent, the State would take responsibility of covering them from its own resources.According a press release, the four-year-project is being supported by the European Union and implemented by DanChurchAid in partnership with Spread, Koraput; Disha, Sundargarh; and the Office of the State Advisor to Commissioners of the Supreme Court on Food Rights.Former State Information Commissioner Radhamohan, retired senior administrator Aurobindo Behera, senior journalist Sampad Mohapatra, Gangadhar Sahu, State Nodal Officer-MDM, Sasank Padhi, State Manager, Save the Children were amongst others who addressed a full house of audience comprising around 100 participants drawn from different walks of life starting from civil society, media, and government officials.Throwing light on the project Santosh K Padhy from DanChurchAid stated that the project would aim to increase awareness amongst and participation of target communities in governance of the schemes/services like Mahatma Gandhi National Rural Employment Guarantee Scheme (MGNREGS), Public Distribution System (PDS), Integrated Child Development Scheme (ICDS), and Mid-Day Meal (MDM).Addressing the audience, Radhamohan stated that such a project would bear the yielded results only when the people’s organizations and the implementing development organizations ensure continuous engagement and dialoguing with the various tiers of the government on the challenges faced by people while accessing the schemes and services.On the other hand, the government officials should also make enough efforts to inform people on what benefits the schemes are going to fetch to people.This will result in better incidence of benefits to people, he added.Behera advised the project team not to flood people with loads of information.He suggested the project team to carefully filter out only the relevant information and disseminate it and also provide facilitative support to people and ensure that people actually made use of the same.The tribals will be able to reap the benefits of the public schemes and services only when people, Government and civil society closely monitor the implementation process together, he observed.Mohapatra called upon the project to initiate some kind of a knowledge sharing alliance of the grassroots workers of NGOs so that the successful strategies and approaches can be learnt and adopted by all.In his address, Padhi of Save the Children advised the project to pay adequate attention to documenting the innovations so that the same can be built as evidences for future advocacy and large scale replication.The project offers great scope for children-sensitive social protection and would go a long way towards addressing inter-generational poverty, he informed.Bidyut Mohanty, who welcomed the participants, stated that one of the key components of the project is to develop select Rajiv Gandhi Seva Kendras (RGSKs) as one-window citizen support centers.Abul Kalam Azad, who facilitated the post-lunch session, stated that the project would strive hard to support the district helplines in all possible means and would try to make the grievance redressal mechanism functional.Raj Kishore Mishra, State Advisor to Commissioners of the Supreme Court on Food Rights proposed a vote of thanks at the end of the workshop.