Odisha Channel Bureau Bhubaneswar: People of Odisha are now virtually gasping for power.Prolonged power cuts across the State have made things difficult for them.While urban areas are experiencing power cuts of two-three hours, rural areas are going without electricity for three-four hours in different phases every day.With the State government announcing on Saturday that power cuts will continue till June next year due to energy shortage, the people have started realising that Chief Minister Naveen Patnaik has failed to realise his father late Biju Patnaik’s dream of a prosperous Odisha. 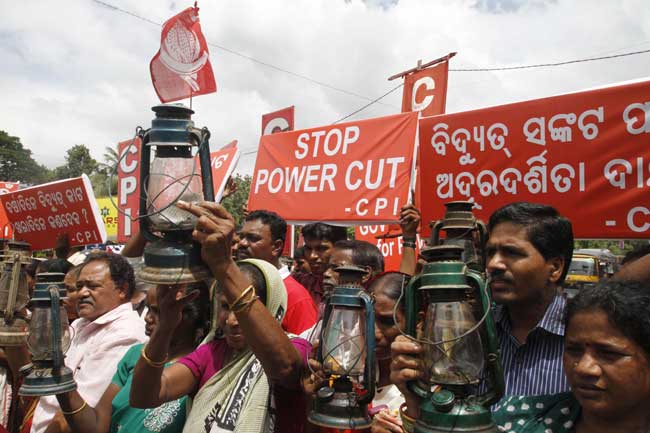 Interestingly, during its 15 year rule Naveen Patnaik Government has not been able to increase the power production in the government sector even by one MW in Odisha.Odisha Power Generation Corporation (OPGC) has not been able to add third and fourth unit for which foundation stone was laid by Naveen Patnaik before the 2004 elections.Further, the State government had announced on June 9, 2006 that two State public sector undertakings will form a joint venture company for setting up a 2000 MW thermal power plant in the State.The State Cabinet had cleared the proposal according to which a joint venture company was to be formed by Odisha Hydro Power Corporation (OHPC) and Odisha Mining Corporation (OMC) and the plant was be set up in the district of Dhenkanal and Angul.The project had to be completed in two phases of 1000 MW each at a cost of Rs.4000 crore in each phase.The proposal is still gathering dust.The Naveen Patnaik Government had also signed 28 memoranda of understandings (MoUs) with different private companies to generate thermal power in the State.But only three companies – GMR, Sesa Sterlite and Jindal India Thermal Power – have started producing power so far.Besides, there are around 30 captive power plants that are being run in the State by different industries, and most of these are also into trading in power.The industries that are selling their surplus power have also signed agreements with various State and Central power purchasing agencies to supply power.The State Government cannot force them to supply power to Odisha.The Naveen Patnaik Government that thrived in power by blaming the UPA government for allegedly neglecting Odisha on every field but keeping mum during Narendra Modi rule, has now put the entire blame on the rain God.Meanwhile, opposition Congress on Monday staged a massive demonstration outside the office of the District Collector of Jajpur, which is the home district of State Energy Minister Pranab Prakash Das.CPI too staged a staged a demonstration in Bhubaneswar to register their protest against the power cuts across the State.The State BJP has also criticised the Naveen Patnaik Government should not not having a contingency plan to meet the crisis knowing well that there would be shortage of electricity in case of scanty rainfall.