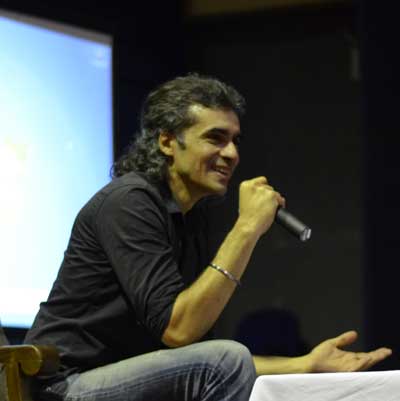 Odisha Channel Bureau
Bhubaneswar: Maverick film director Imtiaz Ali visited Xavier Institute of Management, Bhubaneswar on Saturday evening to have an interactive session with the students of the B-School. The session was organized by IlluminatiX, the media and PR cell of XIMB as the first of its Celeb talks for the year.Ali, who has delivered super-hit gems like “Jab We Met”, “Love AajKal”, “Rockstar” and “Highway”, answered questions posed by the students and faculty members, shared incidents from his personal life and also gave some valuable advice.

Speaking on the Indian film industry, Ali said that it needs to retain its individuality and not change, “The only problem is when we try to become someone else”, said Ali.He stressed on the need to focus on our strengths and interests and that will make our film industry unique.

There should be more focus on making quality films, rather than dazzling audiences.When asked about his cameo in “Black Friday” and his acting plans, if any, Ali, who has a theatre background, laughed it off by saying that everyone makes mistakes.On a serious note, he said “I have acted long enough to know that I am not interested in acting; what I am really interested in is direction”.

He also said that he knows the value of performances and how powerful it can be, thanks to his background.He shed some light on his younger years, saying how he had never even seen a film shoot while growing up in Jamshedpur and had very little knowledge about the Indian film industry.

He said he felt fortunate that his parents always encouraged him in his endeavors.Speaking on his upcoming film, Tamasha, slated to release on 27th November 2015, he said, “You are not expecting Tamasha to be what it is.”

He also praised the acting and chemistry of the lead actors, Ranbir Kapoor and Deepika Padukone.He advised the management students to KISS – Keep it simple, stupid! “Try to break away from the norms that are going to be enforced upon you time and again with the purpose of society and profession”, said Ali.He also acknowledged that Odisha is a beautiful state and that he is always looking for opportunities to shoot here and will do so if the story demands so.