‘The Man Who Knew Infinity’ captures the soul of Srinivasa Ramanujan 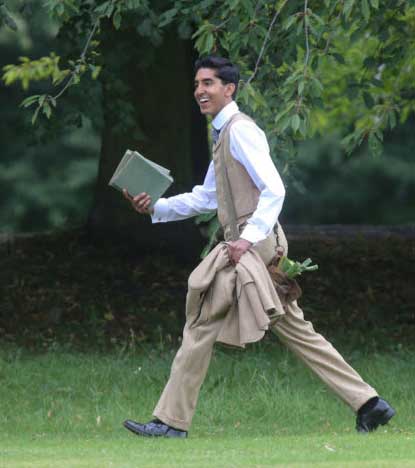 Syed Mahmoud Nawaz*The 46th IFFI opened with the film ‘The Man Who Knew Infinity’, which is directed by Matthew Brown and is produced by Edward Pressman of the Pressman Films, Joe Thomas and others.The film which took almost ten years to make and had a budget of around 10 million dollars, is based on a book by the same name written by Robert Kanigel on the life and times of Ramanujan.

‘My aunt presented me Robert’s book and I was fascinated by the depth with which Indian Mathematics Genius Ramanujan pursued his dream – his journey was so inspiring that I decided to make this film’ said Matthew Brown, the director.He added, ‘I found the personal relationships that Ramanujun had, to be amazing and I loved the idea that for the man, his mathematics was infused with spirituality, at the same time I don’t mean to equate it with some far off mystic way that some westerners might perceive it to be’.

In spite of having no formal training, Srinivasa Ramanujan proved to the world that he very well understood the nuances of the complexity of mathematics.He went on to become a Fellow of the Royal Society.Though he lived for only 32 years in this world, Ramanujan left an indelible mark on the world of mathematics.The genius compiled nearly 4000 identities and equations.He was invited to the University of Cambridge by Professor G.H.Hardy after he saw the samples of his theorems.Hardy became his mentor and was instrumental in bringing his brilliance to the fore and in revealing his genius to the world.This was not easy for Hardy as he had to really work hard in convincing others about Ramanujan and convincing Ramanujan about the importance of coherent proofs to go along with his mathematical results.

When asked what his greatest contribution to mathematics was, Hardy replied that it was the discovery of Ramanujan. After staying in Cambridge, Ramanujan came back to India to be with his family but could only survive for around a year.Around 100 pages of notes from his last year made their way to England later and were added to the Ramanujan archives at the Wren Library at Trinity College, Cambridge.Today physicists and mathematicians are making use of them in their research on string theory, black holes and quantum gravity.Robert Kanigel once said, “The Man Who Knew Infinity is not only about mathematics; it’s about the powerful bond between Ramanujan and Hardy and how it shaped their lives”.

The director of the film Matthew Brown who himself is a writer said that he had no reservations about Kanigel’s book.In fact he praised Kanigel for being very supportive to the film project.“Robert opened up all his research for me and we became instant friends” added Brown.In the film, the character of Ramanujan is played by the young and talented Dev Patel and that of his wife Janaki by the graceful Devika Bhise.The famous actor Jeremy Irons plays the role of Professor GH Hardy.

Others in the cast include Kevin Mcnally, Arundhati Nag, Dhritman Chaterji, Shazad Latif, Anthony Calf, Roger Narayan, Jeremy Northman, Stephen Fry, Toby Jones and others.Inputs from expert mathematicians also added authenticity to the whole project.Swati Bhise, a leading Bharatanatyam dancer, who is well acquainted with the Iyengar culture, also used all her talent in contributing creatively towards the making of the film apart from being one of its executive producers.

Films like ‘The Man Who Knew Infinity’ make us cherish our legacy and remember the contributions made by great people like Ramanujun who in spite of facing difficult times in their lives, never allowed the environment to stop them from achieving great heights and from showing light to the world.The work of Srinivasa Ramanujun will always keep inspiring people all across the world.(PIB)*Syed Mahmoud Nawaz is Special Correspondent, ‘MUSTAQBIL’, New Delhi. The views expressed are personal.