Odisha Channel Bureau KENDRAPARA: In a sudden fit of rage, a 34-year-old migrant tribal settler has shot dead a 44-year-old man with an arrow in a village under Odisha’s Kendrapara district.The cold-blooded murder that was perpetrated on Wednesday afternoon hours might be due to sudden provocation.The deceased and the assailant had no past record of standing enmity, police said Thursday. 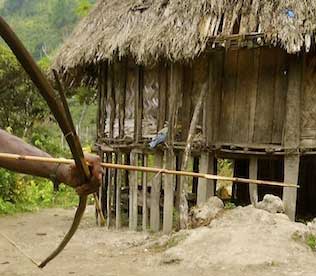 The assailant Bausa Munda, a daily wage earner had also no history of crime.Exact motive of the crime is yet to be ascertained as the accused continues to evade arrest, said Inspector Kendrapara rural police station, Biranchi Bag. The incident occurred at Mundasahi of Chakroda gram panchayat under Kendrapara Sadar police station jurisdiction.The deceased Sunakar Barik a noted Pala singer of Gobindajewpatana had gone to the nearby Mundasahi dominated by tribal persons, where he had a dispute with Bausa Munda (34) a tribal man over some issue. Suddenly in a rage Munda took out his bow and arrows and attacked Sunakar Barik for which an arrow hit the chest of Barik.Some villagers rushed Barik to the district government hospital in Kendrapara but he died on the way due to profuse bleeding.Police have seized the body and sent it to the government hospital for autopsy.After this incident, the accused managed to flee from the village.Police are raiding several hideouts to nab him.Palpable tension mounted in the village Gobindajewpatana and its nearby areas after the death of Barik.Security has been tightened in the village and its nearby areas to prevent any untoward incident, added the police officer.Kendrapara is home to about 10,000 tribal settlers who have migrated here for livelihood stakes.The migrant settlers are original inhabitants of northern and western Odisha.Majority of them are daily wage earners engaged in construction works and brick kilns.It has often been found in the past that they fall to exploitative practice of their employers, said Gayadhar Dhal, a trade unionist.