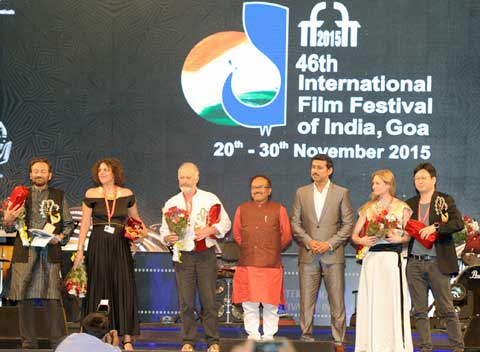 C K NayakThe International Film Festival of India (IFFI) entered into its 46th Edition this year.Organized by the Directorate of Film Festivals, Ministry of Information & Broadcasting, in association with the State Government of Goa, the International Film Festival of India is an endeavour to understand the various social and cultural ethos through the eyes of cinema.Moving from the artistic centres of Asia to the cinematic arena of the world, the festival’s founding principles focus on discovery, promotion and support of filmmaking of all genres, thus bringing together the diversity of the forms, aesthetics and contents. The festival has gained huge popularity amongst the global cinema lovers.

IFFI is a mega event of the film world which also features special sections highlighting particular aspects/segments.After featuring in the last two IFFIs, the North-east section this year remained in prominent focus.

The festival which this year saw a special retrospective on ace filmmaker Padma Sri Aribam Shyam Sharma of Manipur who is also recipient of 15 National Film Awards.Sharma, who was the Chairman of the Feature Jury of the Indian Panorama section, received a “Red Carpet” reception while coming to attend the screening of the “Imagi Ningthem” at the Maquinez Palace theatre. The film was being screened as a part of IFFI’s Focus on North East Cinema.” I am delighted and feel honoured.It is a long journey from 1972 onwards to this stage,” said Syam Sharma while addressing the audience.

His films, ImagiNingthem (My Son, My Precious) had received the ‘Grand Prix’ at the Festival des Trios Continents in 1982 and Ishanou (The Chosen One) was the Official Selection (Un Certain Regard) for the Cannes Film Festival, 1991 while the British Film Institute declared his film Sangai – the Dancing Deer of Manipur as the Outstanding Film of the Year 1989. There were 14 films in the retrospective- Orchids of Manipur, Imagi Ningthem,Yelhou Jagoi Ishanou (Cannes selection),Olangthagee Wangmadasoo Paari,Manipuri,Pony Koro Koshii – the Gate The Deer, on the Lake The Monpas of Arunachal Pradesh Meitei, Pung Lai Haraoba and The Marams.The IFFI this time introduced a unique section featuring next generation film-makers from the North East.In the second section, films of the new generation filmmakers from the North East including ten films were showcased.

Homage was paid to Indra Bania (Halodhiya choraye Baodhan Khai) and Bidyut Chakravarty Dwaar.Directed by Nilanjan Datta, The Head Hunter Arunachali film was screened in the Indian Panorama, along with Dau Huduni Methai, a Bodo film directed by Manju Bora.These two films were among the 26 films in the selected feature category of the Indian Panorama from the North East.

In the Non-Feature Film category, English, Ao Nagamese film Every Time You Tell a Story directed by Ruchika Negi and Amit Mahanti and Phum Shang a Manipuri film directed by Haobam Paban Kumar were selected.Informatively, Utpal Borpujari from the North East, a renowned film Critic and now into film making curated the section this year like in the previous two years.Winner of the Swarna Kamal (Golden Lotus) Award for the Best Film Critic at the 50th National Film Awards of India, 2003 Borpujari has many national and international cine awards to his credit.The legendary filmmaker Shyam Sharma rightly brought out the paradox within the film industry on its regional bias.

“Are Indian film only the films made in Hindi or Bollywood and What is after all an Indian Film?”, Sharma questioned , “When I represent the country in many international film festivals, I am called an Indian Filmmaker, but here in India I am called a Regional Filmmaker.Sometimes we get offended.” “We are small but seriously and honestly film makers,” he quipped.During the inauguration ceremony, Sharma, Manju Borah along with emerging directors M Maniram and Jadumani Dutta were felicitated by Festival Director, C Senthil Rajan and CEO, Entertainment Society of Goa (ESG), Ameya Abhyankar.”

The North-east cinema is growing by leaps and bounds and with international platforms like IFFI, I am confident that more films from the region would reach out to a large audience,” Sharma said.Borah added it was a positive thing that North-east cinema is being focused at IFFI and it has got a special section at IFFI 2015.Speaking at a press conference later, Aribam Shyam Sharma and other Directors explained the bottlenecks being faced by the cinema from the North-east.Cost is a crucial factor in production of North east films and financial help is required in this regard for the sustainability of the North East cinema, said Sharma.

Government can play and should play a big role in giving financial support to the directors from the north-east, elaborated Aribam.Aribam recollected that some of his best works were financially supported by Doordarshan. “The North-east film industry is lagging behind in terms of number of production of films but with the screening of films in the festival will expose the audience to the culture and ethnic value of the region.” The emerging filmmakers Maniram and Dutta shared their experience at the festival and interacted with media and audience.

Talking about his film, Maniram said, “It is an honour that my film is opening the special North East section.The film festival has a wide reach in terms of national and international audience and I see it as a lifetime opportunity for me to showcase my work to diverse audience, he said.In a curtain raiser press conference in New Delhi earlier, the Union Information and Broadcasting Minister Arun Jaitley had rightly said that ‘Focus on North East Cinema’ has emerged as a great platform to showcase the best of films and film-makers from the region to the world.Jaitley said that International Film Festival of India held a special significance and had become a global brand in the world of cinema.It promoted excellence and provided an opportunity to showcase the best domestic and international talent.(PIB)C K Nayak is a Senior Journalist