Odisha Channel Bureau Bhubaneswar: Ramadevi Women’s University, the first Women’s University of Odisha which is named after freedom fighter and social reformer Ramadevi Choudhury was inaugurated by Chief Minister Naveen Patnaik here today.Inaugurating the university, Patnaik said that education is a great liberator that liberates one’s mind to see things in its right perspectives.The Chief Minister expressed hope that Ramadevi Women’s University will be able bring these qualitative changes among its students, and gradually evolve as an institute that inspires the aspirations of women in Odisha. 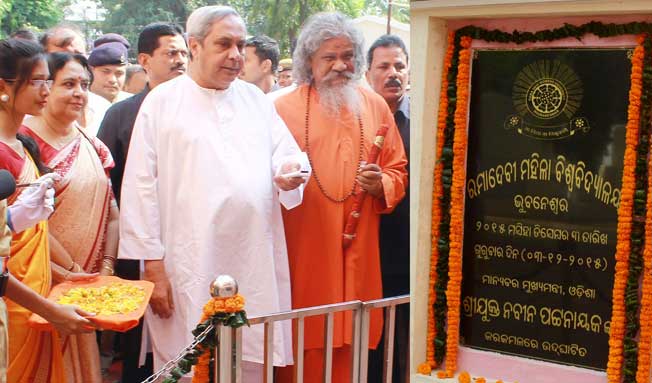 Stating that the social impact of women’s education is greater than that of men in society, Patnaik said that the State government has launched several initiatives for higher enrolment of girls in education starting from the elementary level to the university level, and continuously working towards women empowerment in the state.Ramadevi University is established with overall policy objectives of increased participation of women in higher education, he said.Patnaik expressed hope that the university will initiate studies on women’s empowerment, women’s rights, gender equality and studies that will create confidence and enable our young women for forward movement in society.The government will provide all necessary support to this university to stand out as a centre of excellence, Patnaik added.The university offers post-graduate courses in Biotechnology, Computer Science, Economics, English, Gender Studies, Hindi, Home Science, Odia, Life Science, and Commerce.The inauguration of the university coincided with the 116th birth anniversary of Ramadevi Choudhury.Patnaik paid rich tributes to Ramadevi saying that she was an icon of women empowerment in the State.“Breaking the traditional world of conservatism with rare sense of courage, she had come out of the closet to dedicate herself to the nation and serve society.Her conviction, determination and dedication to bring about social change and empower women through education are rare examples of courage in those times.She was the epitome of women’s liberation and empowerment for the successive generations to follow,” Patnaik said.