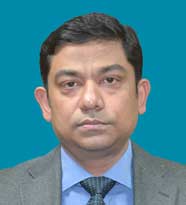 He has vast experience at the Railway Board level-working there as Director, Planning and Director, Traffic Transportation.He has worked on East Coast Railways as Secretary to General Manager and as Chief Freight Traffic Manager of ECOR, wherein he was a member of the team that made it the highest freight-loading railway.As GM Operations in CRIS he has developed a mobile application called ‘Parichaalan’ for Freight Operations.

Roy has done his Masters in Public Management from Harvard University and National University of Singapore.He graduated in Economics (Hons) from Ravenshaw College securing 1st position in Utkal University. He was awarded the Lee Kuan Yew fellowship in the year 2013.Roy has developed an expertise in logistics, operations and strategic planning working in varied capacities and has rich experience in the interface and working of iron ore mines, steel plants, collieries, power plants and port operations.He was also associated with the formulation of the 12th Five Year Plans of the Ministries of Railways, Coal and Power.

He was part of a select team that visited the United States of America for Project Implementation of 25 tonne axle load wagons.He has been to Japan on training for the Dedicated Freight Corridor (2007) and Urban Transport Systems (2010).

Roy held a meeting with the heads of the departments and other senior officers of PPT after assuming charge as Chairman.During the interaction session he expressed his pleasure on the present performance of the port among the major ports, and urged all officers and employees of the port to continue the momentum of growth and put their highest effort for the progress the port.