Odisha Channel Bureau KENDRAPARA: Hours before Prime Minister Narendra Modi’s Odisha visit, the student wing of the BJP has courted a major controversy with its State unit secretary hurling verbal abuses at media fraternity in a function of the local college on Saturday.Police swiftly acting on the complaint lodged by local media persons registered an FIR against the ABVP functionary.The unsavoury incident occurred Saturday afternoon during the course of a function in Kendrapara Autonomous College. 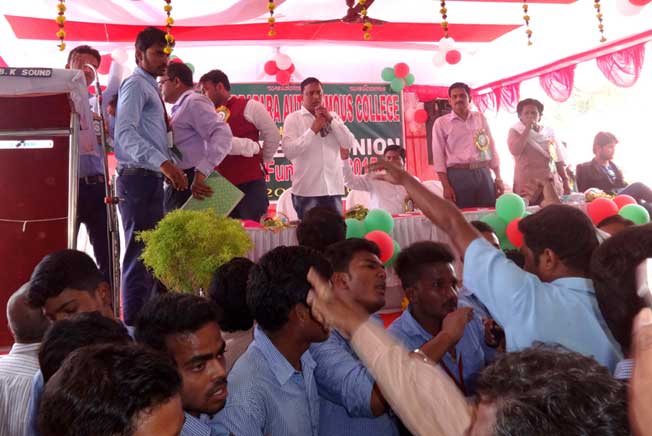 Abhilash Panda, state secretary of Akhil Bharatiya Vidyarthi Parishad, while addressing the function which Odisha Information and Public Relations Minister Atanu Sabyasachi Nayak graced as guest among others, described those in media circles as bunch of corrupt and unscrupulous people.“They do not have ethics.They are like barking dogs earning money through unethical practices.When they are not paid, they resort to barking as the dogs do”, Panda reportedly spoke during the speech.“UPA government was taking good care of them while NDA government led by Modiji has stopped extending undue favours to media people.Therefore, they have become vociferous critics of Modiji”, he reportedly said. Panda went on hurling verbal invective much to the discomfiture of those on the dais including Minister Nayak.Finally, the Minister intervened with agitated journalists raising strong objection at the abusive utterances of ABVP functionary.Later Panda had to beat a hasty retreat from the venue with police escorting him out from the spot.“We have registered case under Indian Penal Code Section 294 (obscene act in any public place), Section 500 (defamatory speech), and Section 504 (intentional insult with intent to provoke breach of the peace) against ABVP functionary Panda.The incident is being investigated and the accused would be arrested”, said Sub Divisional Police Officer Purna Chandra Pradhan.