Modi thanks Patnaik for publicizing his visit to Odisha 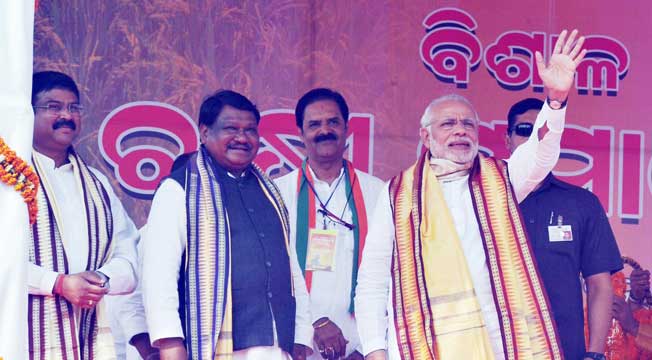 Patnaik has visited Kalahandi and Balangir districts on February 18 to lay foundation stones of some irrigation projects.The Chief Minister had also addressed at least two rallies organised by the ruling BJD in the two districts. Modi expressed happiness over the presence of a large number of people at his rally and also sought to know if the mood of the people had changed.The mindset of the youths in Odisha had changed and they were no longer in a mood to manage with whatever they had.The youth of Odisha wants to see the State develop, he added.Highlighting the Prime Minister’s Crop Insurance Scheme, Modi claimed that it will be a panacea for all problems faced by the farmers.He urged the gathering to convince more and more farmers to insure their crops.He, however, did not make any observation about the large number of farmer suicides reported from different parts of Odisha, particularly Bargarh district which had witnessed highest number of farmer suicides since September last year.The Prime Minister called upon farmers to focus on various aspects like dairy, fisheries, timber farming and urged them to take up latest irrigation methods.Thousands of people from several districts of Odisha and adjoining Chhattisgarh attended the rally.Among others who addressed the rally include Union Agriculture Minister Radha Mohan Singh, Tribal Affairs Minister Jual Oram and Petroleum Minister Dharmendra Pradhan.