Rotavirus vaccine to be launched in Odisha on March 26 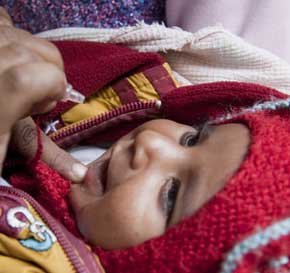 Odisha Channel Bureau Bhubaneswar: Union Health and Family Welfare Minister J.P.Nadda will launch the Rotavirus vaccine through the Universal Immunisation Programme, nationally, in Bhubaneswar, on March 26.Besides Odisha, the vaccine will be provided, in the first phase of roll out, in the national immunization programme, to all children in Andhra Pradesh, Haryana, and Himachal Pradesh.Later, it will be expanded across the country.The importance of new vaccine in reducing under-five child mortality and improving child survival was discussed at a media round-table organized by the Health Department, Government of Odisha, and partners such as UNICEF in Bhubaneswar on Tuesday.Rotavirus, which causes diarrhoea, leads to approximately 78,000 deaths each year in India.It kills 1 child every 4 minutes in India and is a leading cause of under-five child deaths in the country, contributing to about 40 percent of diarrhoea-related deaths amongst children.About 8.7 lakh children are hospitalized annually in the country due to Rotavirus related diarrhoea.Odisha has an under-five child mortality rate of 66 per 1,000 live births (SRS 2013), of which diarrhoea is a major contributor.Nirmala Dei, Director, Family Welfare, Government of Odisha said, “Rotavirus vaccine offers the best hope for preventing the deadly dehydrating diarrhoea preventing thousands of deaths of young children.Earlier, the benefits of this vaccine were available only to those who could afford it, but now it would be available to every child in the state.”Shalini Pandit, Mission Director, National Health Mission, Department of Health and Family Welfare, Odisha said, “Achieving full immunization coverage is critical in order to improve child survival rates.Frontline workers such as ASHA workers regularly mobilize parents to bring their children for immunization.We will now train them on the importance of the Rotavirus Vaccine as well so that they can effectively motivate communities.” “It is important that information about the availability of the Rotavirus vaccine reaches all mothers and care givers in the state. Odisha has one of the highest under–five mortality, of which diarrhoea is a major contributor.The media, through responsible reporting is a valuable partner in getting the messages out on a consistent basis that not only create demand but also dispel fears,” said Chief of Field Office, UNICEF Odisha, Yumi Bae.The Rotavirus Vaccine would be administered, along with other available vaccines, in three doses at 6 weeks, 10 weeks and 14 weeks during the regular immunization sessions across 30 districts in the state.Each dose comprises 5 drops per child.Around 853,000 children between 0-1 year would be targeted through 26,000 immunization sessions statewide every month.Globally, children are provided with Rotavirus vaccine through national immunization programme, in 80 countries, to reduce child deaths and disabilities from diarrhoea.