Odisha Channel Bureau Bhubaneswar: “We have achieved a new milestone towards expanding the coverage of full immunization in the country aimed at reducing child mortality”, said J.P.Nadda, Union Minister for Health and Family Welfare at the national launch of the Rotavirus vaccine as part of the Universal Immunization Programme (UIP) of the country, here today.Terming this as an historic moment and an exemplary step in India’s immunization programme, Nadda said that the Government is committed to reducing morbidity and mortality in children.Strengthening routine immunization is an essential investment in India’s children and will ensure a healthy future of the country, he noted. 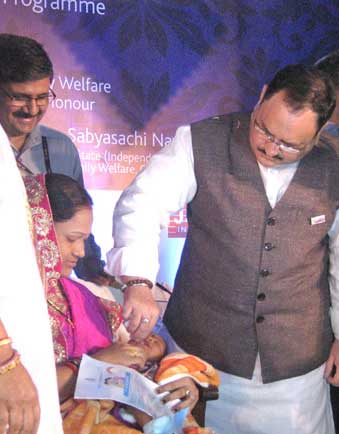 Noting that Rotavirus is one of the leading causes of severe diarrhoea and death among children less than five years of age, and that every year nearly 80,000 to one lakh children die in the country due to Rotavirus diarrhoea, and about 9 lakh children are admitted to hospital due to episodes of severe diarrhoea with 32.7 lakh cases of OPD, Nadda stated that introduction of Rotavirus vaccine will enable us to directly address the problem of diarrheal deaths.The vaccine is being introduced initially in four states i.e. Andhra Pradesh, Haryana, Himachal Pradesh and Odisha and will be expanded to the entire country in a phased manner, he informed.“Adding this life-saving vaccine to our immunization program will not only improve the health of our children but also reduce hospitalization and other conditions associated with diarrhea due to Rotavirus such as malnutrition, delayed physical and mental development among children.Reduced hospitalization reduces the economic burden on the family and the health cost burden on the country”, Nadda said.He further stated that the Rotavirus vaccine has been developed indigenously, under a public-private partnership by the Ministry of Science and Ministry of Health and Family Welfare.This therefore is a landmark achievement under ‘Make in India’ initiative, he stated.The Union Health Minister said that India’s Universal Immunization Programme launched in 1985 is one of the largest immunization programmes in the world and a major public health intervention in the country.He added that the government aims to give maximum protection to the children against Vaccine Preventable Diseases (VPDs).Following this vision, the Ministry has launched ‘Mission Indradhanush’ in December 2014 to fully immunize more than 89 lakh children who are either unvaccinated or partially vaccinated.In two phases of ‘Mission Indradhanush’ spread over April 2015 to July 2015 and October 2015 to January 2016 a total of 1.42 crore children and 36.7 lakh women were immunized in 20 lakh immunization sessions.The gains made in ‘Mission Indradhanush’ have led to health systems strengthening, which provides us a good opportunity for the introduction of a new vaccine and ensuring the reach of immunization program to each and every child, Nadda added.In addition, four new vaccines are being introduced as part of UIP including Inactivated Polio Vaccine (IPV), Rotavirus vaccine, Measles, Rubella (MR) vaccine, and Adult Japanese Encephalitis (JE) vaccine.With these new vaccines, India’s UIP will provide free vaccines against 12 life threatening diseases, to 27 million children annually, the largest birth cohort in the world.IPV has been introduced in six states from 30 Nov 2015 for provide double protection against Polio, he stated.Among others present on the occasion include Union Minister Dharmendra Pradhan, Odisha Health Minister Atanu Sabyasachi Nayak, and Union Health Secretary B.P.Sharma.