Odisha Channel Bureau Bhubaneswar: A large number of protesting farmers courted arrest when they blocked the main road near AG Square here on Tuesday to highlight their demands. 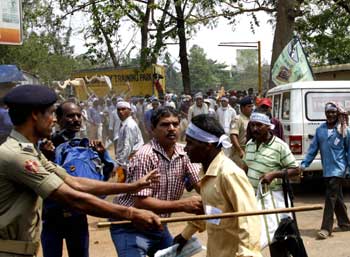 The farmers, who had been staging a dharna on the Mahatma Gandhi Marg since March 18 under the banner of Navnirman Krushak Sangathan, managed to reach the main road leading to Naveen Nivas from the State Assembly despite the efforts of hundreds of policemen not to allow them stage a road blockade.As the police took time to take the agitating farmers into custody from the main road near in front of the Traffic Police Station as well as other places between AG Square and Mahatma Gandhi Marg, Chief Minister Naveen Patnaik delayed his return to Naveen Nivas by at least 15 minutes than his schedule time for lunch.The Sangathan has been demanding payment of compensation to the families of distressed farmers who committed have suicide during the past few months, provision of Rs.5,000 pension for farmers, better procurement facilities and higher minimum support price for their produce.The Naveen Patnaik Government, however, continues to pay no attention towards the demands being raised by the farmers all these days.As many as seven legislators of the ruling Biju Janata Dal had visited the Sangathan’s dharna site on Mahatma Gandhi Marg and held discussions with the Sangathan leader Akshay Kumar on Monday and assured that the government would soon respond to their demands.Kumar, however, informed journalists that the talks had failed as the government didn’t accept their demands till late on Monday night forcing them to resort to Jail Bharo agitation on Tuesday.