Odisha Channel Bureau Bhubaneswar: The second International Yoga Day was celebrated with a lot of fanfare across Odisha on Tuesday.The celebrations, however, remained largely limited to the employees of Central government institutions, government and private companies and educational institutions. 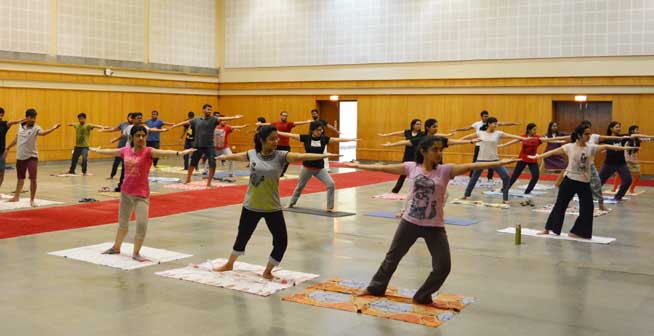 Two Central Ministers – Jual Oram and Dharmendra Pradhan – led the celebrations at Rajgangpur and Bhubaneswar respectively where hundreds of people participated in the yogic exercises.Both the leaders emphasised on the benefits of yoga for health living.Government of Odisha also organised a function in Bhubaneswar to mark the occasion.Health and Family Welfare Minster was the guest at the event.Navratna company NALCO also joined nationwide celebrations its plants and offices in the State.Yoga Mahotsav Samiti and NALCO Mahila Samiti also organized a separate session for the family members of the employees in Bhubaneswar in the evening.Jindal Steel & Power Ltd (JSPL) too celebrated the Yoga Day with a mass yoga session that was participated by hundreds of employees with their family and people from the local villages at Angul.JSPL also celebrated the day at its pelletisation complex situated at Barbil in Keonjhar district.A mega yoga session has been held at its colony to mark the occasion.As part of International Yoga Day celebrations, the Social Responsibility Cell of XIMB formally organised an ‘Art of Living Workshop’ in XIMB Campus.The initiative was taken in order to popularize Yoga among the youth who are not exposed to the concepts of yoga and meditation and consider it a form of spiritual practice.Students and faculty members took a break from their daily routine and participated in the workshop, in which they were not just taught some exercises or ‘asanas’, but were also made aware about the unity of body and mind through a session on meditation.