Odisha Channel Bureau
Bhubaneswar: The National Human Rights Commission has issued a notice to the Government of Odisha through its Chief Secretary, after taking suo motu cognizance of media reports alleging undignified treatment to two dead women by the concerned authorities in the State.He has been given four weeks to submit a report.The first incident relates to a man carrying his wife’s body for 10 Km as the district headquarters Hospital at Bhawanipatna did not provide him the ambulance.

The second incident is also about the non-availability of an ambulance due to which an old woman’s body was slung on a bamboo pole to carry that it to Balasore hospital for postmortem after she was crushed to death under a good’s train near Soro Railway Station. 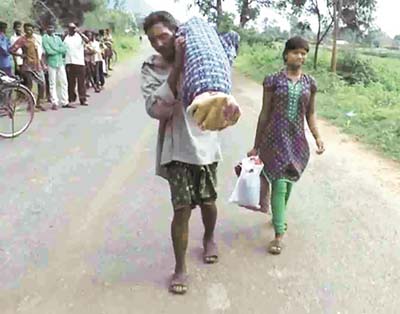 The Commission, expressing its anguish and pain over the two reported incidents, has observed that, if true, these raise serious questions of violation of human rights of the two deceased persons.Right to life of a person under Article 21 of the Constitution of India would also mean that his dead body is treated with respect and the last rites are performed with dignity.

The above incidents have taken place, reportedly, in spite of there being a scheme “Mahaprayana” offering free transportation of bodies from Government Hospitals to the residences of the deceased, the NHRC said. According to the media reports, carried on the 25th August, 2016, Dana Majhi’s wife died of tuberculosis at district headquarters Hospital at Bhawanipatna.Majhi told the hospital authorities that he was a poor man and could not afford a vehicle to carry the body to the village for the last rites.But despite requests the hospital authorities did not offer any help.

He was forced to wrap the dead body of his wife in a cloth and carry the same on his shoulders on foot to his home 60 Km away from the hospital.It was only after he covered a distance of 10 Km that on the intervention of some local news reporters, an Ambulance was arranged for the remainder of the journey. In the second incident, according to the media reports, carried on the 26th August, 2016, 80-year-old widow, Salamani Behera was run over by a goods train near Soro Railway Station in district Balasore. Her body was taken to Community Health Centre.

The Government Railway Police reached the Centre after twelve hours. They could not arrange an Ambulance to take the body to Balasore hospital for postmortem.Reportedly due to the delay, rigor mortis had set in making tying of the body difficult. Therefore, the workers broke the body at the hip, wrapped it in an old sheet, tied it to a bamboo pole and carried it.