Odisha Channel Bureau
BHUBANESWAR: The National Human Rights Commission has taken suo motu cognizance of a media report that many children have died due to Japanese Encephalitis, which has spread in several villages in district Malkangiri of Odisha. 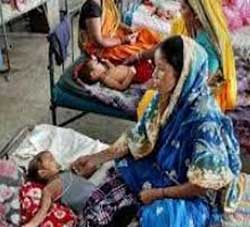 Reportedly, the Encephalitis virus develops in the pigs and is transmitted by mosquitoes to humans. Social workers and the district authorities are of the opinion that culling of pigs is not possible and the only solution is vaccination of the children, which would be done from next year.

The Commission has observed that the contents of the news report, if true, raise issues of violation of Right to Health and Life of the people. Accordingly, it has issued notices to the District Collector of Malkangiri and the Secretary, Department of Health & Family Welfare, Government of Odisha calling for a detailed report including the steps being taken by them, within four weeks.The Commission, while issuing notices, has also observed that the authorities have to be sensitive towards the need to maintain cleanliness in the area.