Tribals condemn Centre and Odisha for violation of FRA

Odisha Channel Bureau
BHUBANESWAR: Hundreds of tribals and forest dwellers of Odisha, who under the banner of Campaign for Survival and Dignity (CSD) celebrated the enactment of of the historic Forest Right Act, 2006 here today, condemned both the Central and State Government for violating the Act.Tribals with their traditional dresses and weapons marched in a protest rally and demanded for proper implementation of the FRA.The protest rally started from Bhubaneswar railway station and marched towards lower PMG square. 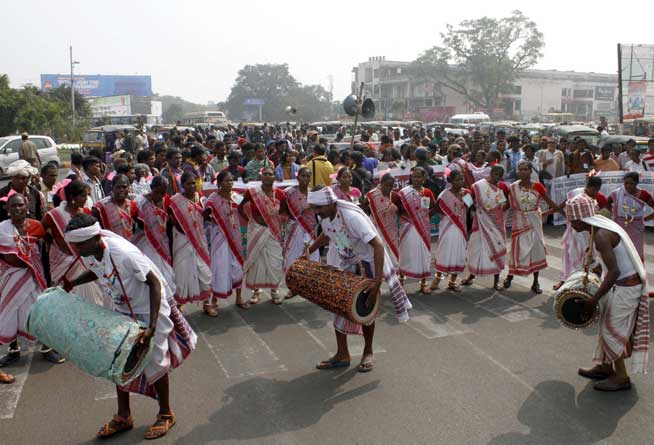 Addressing the rally, veteran activist Prafulla Samantara said that the enactment of FRA ten years ago was a historic step.“For the first time after independence of India, the Government of the country admitted to have done historical injustice with the tribals and forest dwellers from the British period.And due to this, the Dongaria Kondh with their struggle could win against Vedanta and Government of Odisha over Niyamgiri Hills in 2013,” said Samantara.

“The Government of independent India which should have passed the FRA just after India’s independence took 60 years to understand relationship between the tribals and forest.The slow implementation of FRA especially recognition of community rights over forest in last 10 years shows that the government is not happy with this enactment,” said Lada Sikaka of Niyamgiri Surakhya Samiti (NSS).

“But after our victory over Niyamgiri hills, we have understood that this Act not only revives the PESA Act, 1996 enacted for the Scheduled 5th area, but also it extends the provisions of PESA even to non-scheduled area (to the whole country) empowering the Gram Sabha as `Gram Sabha Sarkar’ – the decision maker of its own affairs and custodian of its own resources,” he added.Pradeep Sahoo, senior CSD member said that “in 80 per cent of cases, the IFR titles have been issued without demarcation/verification of the occupied and claimed forest land leading less area.This will lead to serious conflicts in the coming days.In most of the cases, IFR titles issued are without map.

Besides, while no gram sabha rejects any IFR claim, around 1,52530 (1,27,214 of STs and 25316 of OTFDs) have been arbitrarily rejected in the State by the SDLC officials and all the blame of rejection have been arbitrarily put upon the Gram Sabha.And all the so called CFR titles reported to have been issued in the State are faulty”.CSD member Anna Kujur of Sundargarh raising concern said that “in last 10 years of FRA enactment and 8 years of its implementation across the State, it is not at all encouraging one.

While Government of Odisha claims to be No.1 in the whole country to have recognised highest number of Individual Forest Rights (IFR) titles in comparison to other States of India, the bare realities is that, Government of Odisha has used this recognition Act as land distribution scheme for its political gain.”In the protest rally, CSD members condemned both Central and State Government for violating the FRA, 2006.“The Ministry of Forest and Environment (MoEF), Government of India is openly violating FRA by bringing unconstitutional circular( 28th October 2015) bypassing gram sabha’s consent for liner project, and privatising forest.Besides, the recent enactment of CAMPA Fund Act, 2016 itself is an open violation of the authority of Gram Sabha recognised under FRA,” they said.

Among others who addressed the protest rally are Arun Dehudi from Boudh, Trilochan Punji and Rupadhar Bisoi from Balangir, Meghnath Kharsel from Nuapada, Biranchi Bariha from Bargarh, Amulya Kumar Nayak, Lal Mohan Murmu and Narendra Pingua from Angul, Upendra Nayak, Lada Sikaka and Pusika Sikaka from Niyamgiri Surakhya Samiti in Rayagada, Prafulla Mishra and Sarojini Nayak from Nayagarh, and Radhakanta Sethi of AIPF.At the end of the rally programme, a four member delegation met and appraised on the violation of FRA to the representative of the Governor of Odisha at Raj Bhawan and submitted the CSD, Odisha memorandum listing 16 demands.The demands include;
1.Respect the gram sabha as Gram Sabha Sarkar and let it take its own decision independently.
2.Demarcate all the forest land under actual occupation of the tribals and forest dwellers and issue correct IFR title. Review all the rejected and pending IFR claims in the State.Create awareness at the community level so that they can reclaim the left area not issued in the IFT titles issued.
3.Issue IFR titles to the OTFDs as per the approval and recommendation of the Gram Sabha Sarkar.
4.Review all the community forest rights titles issued in the State and issue correct titles mentioning the actual CFR area.
5.Dissolve all VSS formed in State.These are illegal after FRA, 2006.Halt plantation programme over occupied forest land of tribals and forest dwellers. Let the forest development and management fund should directly come to the Gram Sabha through the forest Protection and management committee formed or to be formed under Section 5 of FRA, 2006 and Section 4(1) (e) of the Forest Rights Rules, 2007.
6.Halt evicting and relocating people from sanctuaries without their will.
7.Stop collecting royalty on Minor Forest Produce and ensure ownership rights of Gram Sabha and forest dwellers over Minor forest produce including kendu leave and bamboo.
8.Identify all forest and un-surveyed villages falling in the reserve forest area in the State and immediately recognise village status to them and convert them into revenue village.Ensure in situ rehabilitation recognising both individual and community forest right to all the displaced community in the State.
9.Monitor the violation done in the mining area of the State.Recognised forest rights first and respect the decision of the Gram Sabha Sarkar during diversion of Forest land for non-forest developmental purposes.
10.Dismiss and withdraw all forest Offence cases still continue in different courts in the State.If forest offence cases are filed, first take approval and cognisance of the Gram Sabha Sarkar.
11.Respect the PESA, 1996 and implement it in its true spirit in the Scheduled area of the State. Restrict the settlement and land ownership of non tribals in scheduled area and protect the scheduled area.
12.Ensure Panchayat in every village.The gram sabha of a village should be in the line of FRA Gram Sabha where the community/ gram sabha would be the decision maker of its own affairs.
13.Recognised Habitat rights of all the 13 PVTG/PTG in the State and protect their area from encroachment of outsiders.
14.Provide village wise list of the IFR titles issued in the State.
15.Immediate make ground demarcation of the occupied and claimed forest land by tribals and forest dwellers in the State and thereafter do RoR correction accordingly.
16.Rules to be framed to ensure Gram Sabha authority in the use and management of CAMPA fund.Let the CAMPA fund or any other forest development and management fund come directly to the Gram Sabha.