Introduction:
Odisha being a coastal state and because of its geographical location, is prone to floods, cyclones and droughts. According to the Odisha State Disaster Management Authority (OSDMA), 95 out of the last 105 years, the state has been affected by disasters brought on by heat waves, cyclones, droughts, and floods. Since 1965, these calamities have become more frequent and widespread. Such disasters have affected millions of people in the state, but the poorest and the marginalised section of the society are the most vulnerable since they have least resources and capacity to cope and adapt to rapidly changing climate (Anu Jogesh and Navroz K. Dubash, 2014). Women live in poverty and in disadvantaged conditions and are expected to be disproportionately affected with climate induced disasters. Women have maximum burden when it comes to managing households but limited access to education, employment, health care etc. They also have limited say on decision made on adaptation strategy both within family as well as at the policy level which limits the adaptation capacities of women as compared to men. Therefore it is essential for any action plan to mitigate the conditions arising of climate change from a women’s perspective. 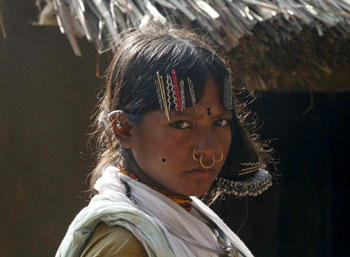 The Government of India first outlined the strategies to meet the challenges of Climate Change through its National Action Plan on Climate Change (NAPCC) which was released in 2008. The National Action Plan advocates a strategy that promotes adaptation to Climate Change and Enhancement of the ecological sustainability of India’s development path. The NAPCC recognises the importance of gender in climate change. It states “with climate change there would be increasing scarcity of water, reductions in yields of biomass, and increased risks to human health with children, women and the elderly in a household becoming the most vulnerable. With the possibility of decline in the availability of food grains, the threat of malnutrition may also increase. All these would add to deprivations that women already encounter and so in each of the Adaptation programmes special attention should be paid to the aspects of gender”.

The plan has highlighted the various vulnerabilities faced by women as an effect of climate change. The document notes that with increase in scarcity of water in several parts of Odisha and also the reducing yield of biomass, it would affect the women disproportionately, as they are traditionally responsible both for fetching water and biomass for cooking in rural households. Additionally, with changing climate, there is increased risk to human health especially during the period of pregnancy. The document highlights the role of Women Self Help Groups to augment social capital and make the community more resilient. The plan has also identified the high risk heat poses to vulnerable groups such as infants, elderly, pregnant women, disabled, farm labourers etc.

Health
There are significant social, regional and gender disparities in accessing public health in Odisha. Interior regions in general and tribal districts in particular have poor physical and economic access to health services. Children under five years and pregnant women are expected to be the most vulnerable. There are some initiatives taken in health sector such as strengthening approaches to deal with heat wave conditions exacerbated due to climate change, undertaking measures to manage water borne disease that have worsened due to climate change impact and strengthening approaches to manage vector borne disease. Women and Child Development Department of Government of Odisha played a key role in the planning and evacuation during the Phailin and it gave priority to pregnant, nursing women, and old women while distribution of relief items.

Agriculture
Agriculture sector is highly vulnerable to climate change. Some part of Odisha is facing flooding and cyclone; where as other parts of Odisha are drought prone. Due to these types of natural calamities, decline in crop yield is leading to shortage of food grains and it creates pockets of malnutrition in the state. Due to this situation, some adaptation and mitigation actions have been taken up in this sector such as adaptation of system of rice intensification (SRI) method in rice cultivation, developing micro irrigation system, increasing water use efficiency, creation of farm pond, capacity building of farmers and climate change related research.

Forestry
Forestry is also an important sector in both form of mitigation and adaptation point of view. People of the interior area and tribal are dependent on the forest for their livelihood. The women collect firewood and forest products from the forest. Some activities have been taken up in Climate Change Action Plan such as increasing reforestation/afforestation in degraded forest areas, increasing planting on forest land and also exploring where new and increased tree planting could create barriers to storms and cyclones in the coastal zones and capacity building of JFM (Joint Forest Management) and Panchayatiraj institutions to adapt to climate change. In order to protect the vulnerable community from floods and cyclones, mangrove plantations have been initiated.

A gender analysis of the Draft Odisha Climate Change Action Plan (2015-2020) has been done and some of the observations and suggestions are as below:

Health
Odisha Climate Change Action Plan under health sector states that the objective is to reduce maternal and infant mortality rates. The proposed activities include capacity building of health staff and personnel and integrate climate change aspects into the state health policy.

Hence it is suggested that to make it gender sensitive issues of maternal health and female infant mortality rates have to be taken up.

Agriculture
Agriculture is the main livelihood in Odisha and it shows that more number of women are working as agricultural labourers. As per the Census, 2011, 48.4% women were working as agricultural labourers in Odisha. Under the Agriculture sector, the Draft Action Plan highlights the key priorities which include better land and water management, a greater reliance on rain-fed agriculture, expansion of agricultural markets, better technology, higher public and private investments, and effective implementation of the ongoing programmes in agriculture and allied sectors such as for crop and weather insurance. Access to credit, technology and other inputs for agriculture activities should be made easy for women particularly in the disaster and climate change areas, it suggests. Climate change related disasters will be factored into agriculture and the needs of the women in such instances should be accorded high priority. Women will be able to undertake appropriate adaptation initiatives in the context of climate change.

However, plan could have integrated watershed development programmes in rain-fed areas which are vulnerable to climatic variations having a component of women’s participation. Women’s participation in agricultural technology should be made disaster resilient as more women are affected by disasters.

Forestry
This sector recognises the importance of joint forest management so that people can participate in conservation, management, and regeneration.

Since the engagement of women is present in joint forest management the plan should include a mechanism whereby the participation of women is not only ensured, but institutionalised.

Disaster Management
In the disaster management, one of the proposed activities is to set up an integrated capacity building protocol covering shelter and a self help groups under the Community-Based Disaster Risk Reduction Framework (CBDRF), including college and school volunteers. This should mainstream the participation of women.
As all self-help groups are formed by women, gender parity should also be in place in all community-based activities and strategies.

Conclusion:
To sum up gender needs to be a cross cutting issue across all sectors. All adaptation strategies have to be gender sensitive as well as gender inclusive. However, in the 11 sectors, gender

specific vulnerability mapping as well as gender specific intervention plan has to be an integral part.

Need of gender aspect in Climate Change Action Plan
Women are more vulnerable and experience social inequities besides economics marginalisation. They also lack information and resources. Moreover, they have restricted mobility, employment opportunities/ income generating activities, and property rights. This apart, even though their adaptive capacity is low, the disproportionate share of adaptation falls on women. Thus gender is important in Climate Change Action Plan.

There are specific methodologies which are useful to achieve gender sensitivity. These are:
- Gender Equality: Actions and policy aim to achieve gender equality
- Gender Balance: Enhance the representation of women in decision making, some with explicit goal of achieving gender balance on decision making
- Women as vulnerable Group: Recognise women as a vulnerable group
- Gender mainstreaming: Integration of gender norms, roles and relations in the development of actions and policies and implementation, which supports gender mainstreaming

Women are particularly vulnerable to climate change because they are highly dependent on local natural resources for their livelihood. Women take the burden of securing water, food and fuel for cooking, and thus face the greatest challenges. Thus, it is important to identify gender sensitive strategies that respond to these needs of the women. In the Odisha Climate Change Action Plan, the vulnerability mapping should be gender specific, and strategies should focus on capacity building of the women. All the sectors in climate change policy should identify the gaps related to gender and develop plans to minimise it. More women at all levels should be included in the decision making process in Climate Change Action Plan to integrate gender related knowledge into policy making and implementation.

India Census 2011, office of the Registrar General and Census Commissioner.