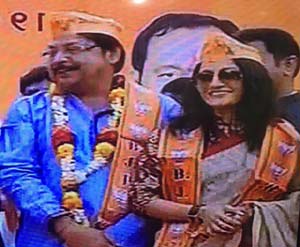 The two actors and the ex-MLA joined the BJP in the presence of Union Petroleum Minister Dharmendra Pradhan, the party’s face in Odisha.

Mihir Das had joined the BJD before the 2014 elections, but had been active in party work.

BJP has been trying to add to its strength by inducting film actors as ruling BJD was already having several film stars in its fold.