A fact-finding team of four human rights workers who visited the area has demanded immediate investigation by a high-level expert team into the increasing incidence of chronic kidney disease in the villages surrounding the IREL facility, Chhatrapur, in order to conclusively establish the causal factors and recommend actions for prevention and remediation. 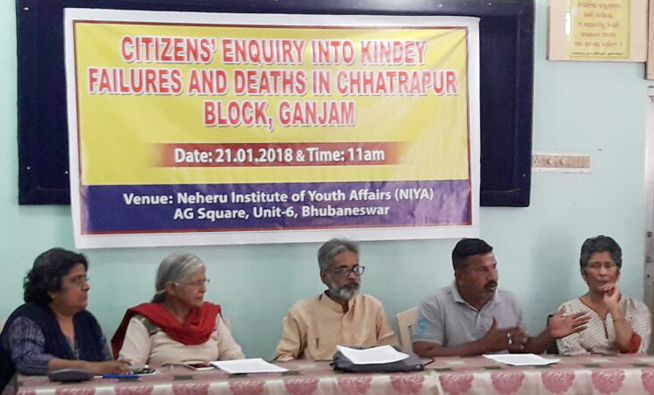 The group has demanded immediate relief to affected individuals through free treatment at MKCG or other government facility with adequate infrastructure and expertise to handle the large patient load.

The team has also demanded immediate action by the State government to fulfill the right of the affected communities for clean and safe water for domestic consumption and use.

It has also sought action to remove potentially toxic solid waste in and around the affected villages, in particular the waste dumps around the tailing ponds outside the IREL facility.

During the visit, the team met over 25 affected persons, their families and local leaders in three of the affected villages – Badaputti, P-Lakhimpur and Baginipetta. The team also met the District Collector and IREL officials, district health officials and the senior Consultant Nephrologist of MKCG Medical College.

“The three villages show an unusually high incidence of chronic kidney disease. All the persons interviewed and cases cited were substantiated with diagnostic reports, treatment records and medical certificates,” according to the fact-findin team.

Records from local activists mention at least 200 cases diagnosed over the last three years, with at least 70 deaths, most of them of individuals of working age, the team claimed.