Odisha Channel Bureau
Bhubaneswar: In a major jolt to the subversive designs of the Maoists in Malkangiri district, security personnel have recovered and seized huge quantity of Maoists arms, ammunition, equipment and gadgets.

Giving this information to the media here on Friday, Odisha Director General of Police Abhay said that in the month of January 2020 an extensive composite operation was launched in this Swabhiman Anchal (cut-off area) in Malkangiri district by Odisha Police. 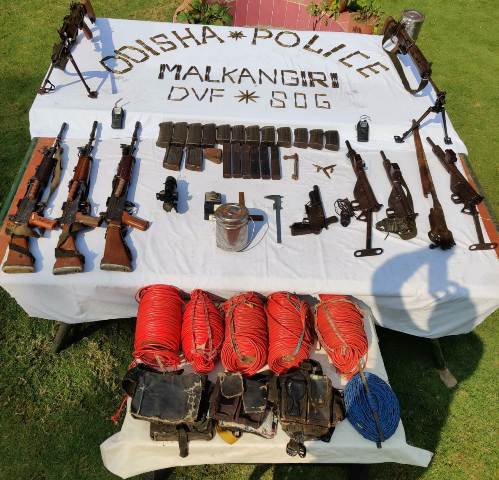 The teams from Odisha police, BSF, CoBRA and Andhra Police participated in the joint operation, which was one of the biggest counter-LWE operations in the area, he said.

This operation provided security coverage for road construction in the cut off areas which was opposed by the Maoists. Connectivity in the area brings development which in turn changes the perception of the people of the area towards mainstreaming with the society, added the DGP.

The DGP said immediately after this composite operation there was an exchange of fire between a team led by Malkangiri Superintendent of Police comprising of SOG and DVF commandoes of Odisha Police and the Maoists at Goiguda village on January 15.

On the basis of specific information recovered from Maoists documents and electronic devices seized post this exchange of fire, SOG and DVF teams of Odisha police launched intense search and area domination exercises resulting in uncovering of the major Maoist hideouts and dumps in Swabhiman Anchal and adjoining areas. And this led to recovery and seizure of huge quantity of Maoists arms, ammunitions, equipments and other articles, the DGP said.

It is suspected that these arms and ammunitions could have been looted from the police in the past, said the DGP, while adding that this is under verification.

“We suspect that the cache of arms was hidden by the Maoists of Andhra-Odisha Border Special Zonal Committee (ABSZC). In the wake of recovery, police have intensified combing and area domination exercises in the region in a bid to recover more such naxal dumps, if any,” said Abhay.