Santosh Patnaik
Visakhapatnam: The ongoing tussle for legal heir among the daughters of late Pusapati Anand Gajapati Raju took a new twist on Friday with his eldest daughter Sanchaita squarely blaming her rivals in the Vizianagaram royal family for spreading fake news.

Former Union Minister for Civil Aviation P. Ashok Gajapati Raju, brother of Anand, was removed from chairmanship of Simhachalam Devasthanam and replaced by Sanchaita by the State Government. 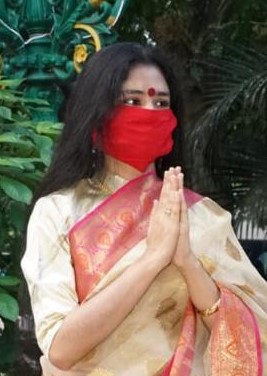 Sanchaita is the daughter of Anand, a former Minister, from his first marriage. After returning from UK, Urmila, daughter from the second marriage along with her mother Sudha claimed that she is the legal heir of Anand.

Ashok is also up in arms against Sanchaita saying she is not eligible to become hereditary trustee of Simhachalam’s Sri Varaha Narasimha Swamy temple and chairperson of MANSAS Trust.

The temple is frequented by a lot of people from Odisha. It contains some inscriptions written in Odia.

“There is fake news and disinformation being spread by certain people regarding the Sirimanothsavam festival held at the Vizianagram Fort on October 27,” Sanchaita said in a statement issued by her office.

As is customary since the venue was the Fort, the Chairperson of Mansas Trust & her guests are allotted the first row to witness the ceremony.

Referring to Urmila’s charge of humiliation at the festival, she said “some extended family members walked in without prior intimation with an entourage of male chaperones and occupied the front two rows.”

The statement said “out of courtesy our Chairperson, Sanchaita Gajapati Raju, let them sit and added a chair for herself and was flanked by the Executive Officer and the Correspondent of Mansas Trust.” The trust manages educational institutes started by the royal family.

Urmila and her mother who were sitting next to the EO watched the event for over 45 minutes and then left the venue but later informed the press that they were not given any seats and therefore left the festival mid-way, the statement pointed out.

Urmila and mother later claimed that since they belong to the royal family, they had to be given the respect shown to the Maharanis and Princesses.

When contacted, Sanchaita told Odisha Channel that all ceremonies belong to the people of Vizianagaram and feudal mindsets had no place in 21st century modern progressive democratic India, which is mandated by the principle of a government by the people, of the people and for the people.

All respect and due courtesy to the guests were extended to Urmila and her mother and her remarks of being humiliated because she had to sit next to the correspondent of the trust is uncalled for.

“The petulant behaviour of the young lady and her mother only underscores their arrogance, lack of empathy and insensitivity towards the common working class,” the statement said.