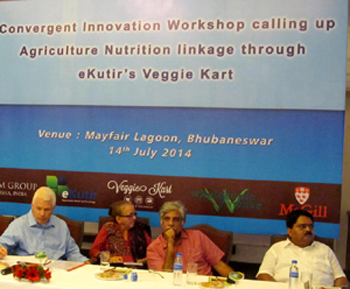 Odisha Channel Bureau Bhubaneswar, July 15: To scale up Agriculture-Nutrition linkage by bringing Indian and international partners together, VeggieKart, a joint initiative of eKutir and MGM Agriventure Limited in association with McGill Centre for the Convergence of Health and Economics (MCCHE) and Wholesome Wave, USA organised Convergent Innovation Workshop on calling up Agriculture-Nutrition linkage through eKutir’s VeggieKart here on Monday. ‘Convergent Innovation’ (CI) has been advanced as a solution oriented paradigm that aims to go beyond what has been possible thus far in addressing complex human problems at the nexus of agriculture, food and health by defining new paths of convergence between economic growth and human development, according to an official release issued on Tuesday.The workshop organised by VeggieKart in association with McGill Centre for the Convergence of Health and Economics (MCCHE) and Wholesome Wave, USA, taps into agriculture funds for food stamps to improve accessibility and affordability of fresh fruits and vegetables to address obesity and other non-communicable diseases in underserved communities.Dignitaries attending the workshop focused on ‘VeggieLite’, another innovation done by eKutir, to be operational under the VeggieKart model will be commenced in August, will create a distribution channel for farmers to sell fresh vegetables directly to low income groups.It is an extension of eKutir’s VeggieKart initiative which creates sustainable market linkages for rural farmers to sell their produce.eKutir’s pioneering project VeggieLite, created in collaboration with Wholesome Wave and McGill Center for the Convergence of Health and Economics (MCCHE), a recipient of Grand Challenges India 2014, supported by the Gates Foundation, USAID and Department of Biotechnology, the Indian government’s anti-poverty scheme.A MoU was also signed between the three partner organisations on the occasion.The project has been awarded under the Grand Challenges program ‘Achieving Healthy Growth through Agriculture and Nutrition’.This rewards the development of innovative interventions that integrate agricultural practices with nutritional outcomes aimed at improved health benefits for women and children, resulting in significant socio-economic impact.Prof.Laurettee from the Department of Convergent Innovation, McGill University after signing of the MoU said, “We are quite excited to be associated with eKutir, who also believes in the principles of convergent innovation” VeggieLite hubs will be established in local villages and urban slums to sell fresh, affordable and nutritious vegetables to low income households.Women will be empowered, by undertaking key roles in this initiative as smallholder producers, managing the VeggieLite hubs and as consumers of fresh produce for their households.