Andhra to pay ex gratia of Rs. 25 lakh to lone survivor of family which committed suicide

Santosh Patnaik
Vijayawada: The Andhra Pradesh Government on Monday announced ex gratia of Rs. 25 lakh to the lone survivor of a family which committed suicide by jumping before a running train near Nandyal.

The police arrested a Circle Inspector and a Head Constable for abetment of suicide Abdul Salam, an auto driver and his family which raised concern among minorities after a selfie video by the family blaming police harassment for their death went viral. 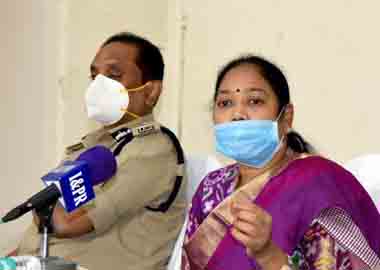 Home Minister Mekathoti Sucharita said that the guilty would not be spared in any case and stressed on friendly policing as the need of the hour.

She announced ex gratia of Rs. 25 lakh to the lone survivor of the family which committed suicide in Nandyal. The family of Salam had explained by a selfie video the harassment by the police, she told the media.

Chief Minister Y.S. Jagan Mohan Reddy immediately intervened and gave orders to arrest the accused along with instructions for conducting an in-depth inquiry. She said that the arrests were made within 24 hours after the Chief Minister directed DGP Gautam Sawang and two senior IPS officers, IG Shankha Brata Bagchi and Guntur ASP Arif Hafeez to probe the case.

The Home Minister stated that departmental action had been initiated on the CI Somasekhar Reddy and Head Constable Gangadhar. They were also booked under the Indian Penal Code`s Sections 306 (abetment to suicide), 323 (voluntarily causing hurt) and 324 (voluntarily causing hurt by dangerous weapons or means). She said that the Chief Minister had made it clear that such incidents would not be ignored and serious action would be taken.

For lodging complaints on officials, a dedicated toll-free number at the district level will be set up, where anyone can file a complaint if they are framed in any false case or facing any trouble in the name of the investigation.

DGP Gautam Sawang said action would be taken against the police if they harass people. He said criminal cases were also being registered against the accused policemen besides the departmental action.

The DGP said that the police were also directed not to use force and adapt friendly-policing.

As the accused in question are part of the local law enforcement machinery and likely to hamper the investigation by threatening the witnesses, the State administration has filed a petition seeking immediate cancellation of their bail.

The government contended that the accused being released on bail could result in witnesses turning hostile and intimidate new witnesses who would otherwise volunteer to testify.

The government said the investigating authorities are in possession of incriminating evidence against the accused.