Naveen launches distribution of smartphones to people of Swabhiman Anchal

Speaking on the occasion, Patnaik said “the Swabhiman Anchal has always been in my heart. I will continue my efforts to make it a leading region in the State”. 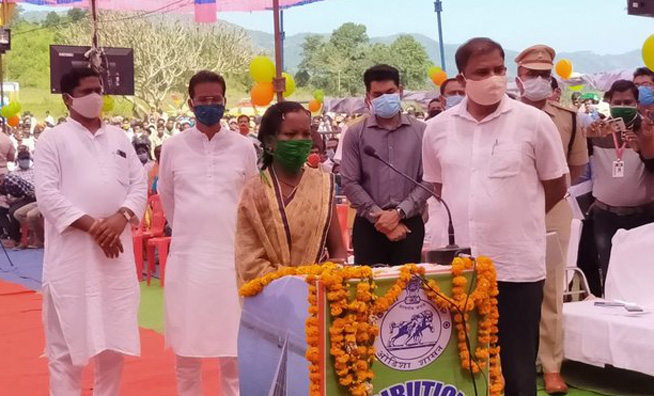 The Chief Minister announced that the State government would provide free smart phones to all families in the Swabhiman Anchal. “Mobile phones will help children learn online and connect people with those in other parts of the country,” he said.

Patnaik said in order to take benefits of digital revolution to last mile and expedite social security schemes, three more 4G mobile towers will be installed in the Swabhiman Anchal taking the total to seven.

Patnaik reminded the people of the area that he visited Swabhiman Anchal in July 2018 and inaugurated the Gurupriya Bridge. At the time, he had announced a special package of Rs. 100 crore. Later, it was increased to Rs. 215 crore, he said.

Highlighting the ongoing development work in the Swabhiman Anchal, Patnaik said that in view of the people’s interest for turmeric cultivation in the area, arrangements are being made for more turmeric cultivation as well as for the processing and branding of their produce.

The Chief Minister announced that the 33x11KV substation work for electricity services will be completed soon and an 11KV 3 phase line connection will be provided.

He further announced that Rs. 100 crore would be spent on 78 km of blacktop roads and seven bridges, starting with concrete roads in villages. He also said that a large piped water supply project worth Rs. 20 crore has been started for piped drinking water and 250 tube wells have been completed.

He said 43 lift irrigation projects and 419 cluster deep bore wells would be constructed at a cost of Rs. 32 crore for irrigation in the Swabhiman Anchal, which would irrigate 1,600 hectares of land. Work is underway on 42 Anganwadi centres and health sub-centres in Swabhiman area and it will be completed soon, he said.

On the occasion, Patnaik urged the Maoist cadres to stop the violence and return to the mainstream and help in the development work.

The Chief Minister held talks with some of the people of Swabhiman Anchal. A film on the development of the cut-off area was screened on the occasion.