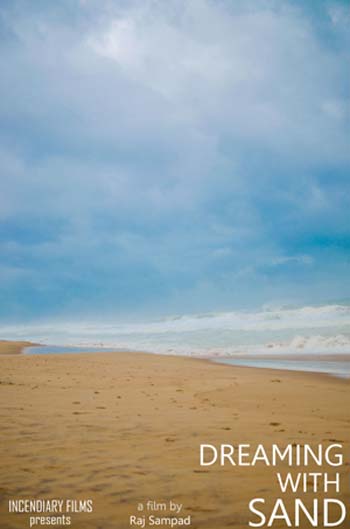 Odisha Channel Bureau Bhubaneswar, July 16: The journey of Sudarsan Pattnaik from being in a financial predicament to rising into one of the greatest and critically acclaimed sand artists on the planet has been can now be watched in a docufiction film.The short film titled `Dreaming with Sand’ has been made by Raj Sampad, an independent film maker from Bhubaneswar, Odisha.The film, which is a combination of fictionalised parts of the most well known sand artist from India and his real life story, was released online on Wednesday.Raj Sampad has done three short films under his own production house Incendiary Films as of yet on various offbeat ideas.“All of my projects have been submitted to many national and international film festivals,” said Sampad.“Pattnaik has been very cooperative regarding my project with all his valuable suggestions being in place,” said Sampad.Dreaming with Sand has now been an official entry into the 2014 Sundance Film Festival, U.S., according to the young filmmaker.While the film has been directed by Sampad, the narration has been by Sudarsan Pattnaik with Arnav Pati and Bivash Rath as SFX/Audio Engineers, and Soumya Mohapatra as Still Photographer.Dreaming with Sand can be watched on: https://www.youtube.com/watch?v=fb_e9mJXWq8