The officials told him during an aerial visit and inspection of the site that 66.86% of head works, 91.69% of Right Main Canal, 68.34% of Left Main Canal and 41% of land acquisition and rehabilitation and resettlement had been completed. 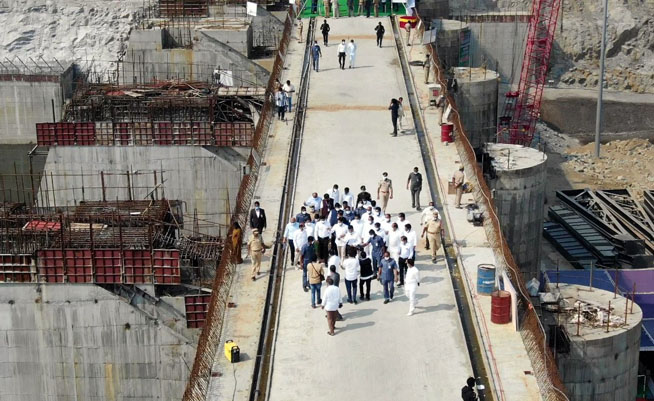 The BJP-led Government at the Centre has declared it as a national project as per promise made at the time of bifurcation and later it became part of AP Reorganisation Act, 2014.

There is dispute between the Centre and the State over the revised project estimates made by AP Government and the reimbursement of funds spent so far. AP represented to the NDA several times to release funds on time.

Polavaram, considered lifeline for AP, is in advance stage of construction at 42 km upstream of Sir Arthur Cotton Barrage of Dowleswaram on the river Godavari near Ramayyapeta village in West Godavari district.

Talks are in progress to iron out differences over fears of submergence in areas bordering Odisha and Chhattisgarh.

The project envisages a reservoir capacity of 194.6 TMC, total utilization of water 322 TMC, creating new ayacut of 7.2 lakh acres, 23.44 TMC for Visakhapatnam to meet drinking water and industrial needs and a 960 MW hydro power plant. It also aims to provide utilization of 5 TMC to Odisha, 1.5 TMC to Chhattisgarh and diversion of 80 TMC to the Krishna river.

After formation of YSRCP Government in 2019, the contractors for coffer dam, spillways and spill chambers were changed through reverse tendering. The government claimed reverse tendering led to a saving of Rs .838 crore.

The State has notified revised administrative approval for Rs. 55,548 crore.

Official sources told Odisha Channel that till October 31, 2020, Rs. 17,665 crore had been spent. Before declaration of national project, the State incurred an expenditure of Rs. 5,135 crore.

The Centre has so far released Rs. 8,507 crore to the State through Polavaram Project Authority. The Centre has to release Rs. 4,022 crore, which the State spent after Polavaram was declared as a national project, sources said.

The Centre is to ratify the revised estimates as BJP leaders including State general secretary Vishnuvardhan Reddy accused the State of exaggerating the estimates.