Santosh Patnaik
Vijayawada: Andhra Pradesh Chief Minister Y.S. Jagan Mohan Reddy sought the support of the Centre for expediting the process for shifting the AP High Court from Amaravati to Kurnool and approval for revised estimates made for Polavaram project. 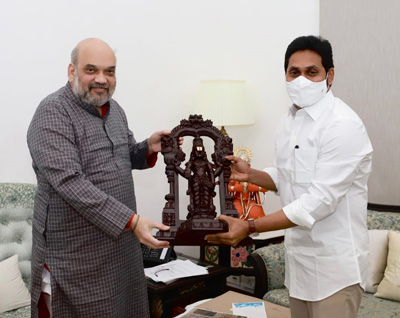 The Chief Minister submitted a memorandum on Polavaram and urged the Union Government to consider the Second Revised Cost Estimate as per the 2017-18 index and pass the Rs 55,656 crore expenditure and give necessary instructions to the Finance and Jal Shakti Departments accordingly.

He also urged the Centre to reimburse the land acquisition and relief and rehabilitation packages as per the Land Acquisition Act 2013.

An amount of Rs 1,779 crores is still pending towards reimbursement of Polavaram works along with December 2018 Bills.

Any delay will further escalate the cost and the national project which is the lifeline should be expedited, he told the Home Minister.

He also appraised the Home Minister about the effective steps taken during the Covid pandemic. Even during the difficult situation, the welfare schemes were not stopped. The State machinery is in full preparedness as per the Central guidelines in the distribution of Covid vaccine as per the priority norms set and the vital cold storage links are being established. Special Category Status (SCS) is important for the State development, he reiterated.

The other issues discussed during the meeting include the request to expedite the Union Power Ministry to issue the necessary certificate for taking additional loans as part of the permission given in wake of the Covid, the Rs 1,600 crore due towards PDS for the years from 2013-14 to 2018-19, GST dues from April to September 2020 amounting Rs 4,308.46 cores, the dues to local bodies as per the 14th Finance Commission amounting to Rs 1,111.53 crores and Rs 1,954.5 crores as per the 15th Finance Commission besides Rs 3,801.98 cores pending towards NREGs.

According to a release issued by Chief Minister’s Office, Reddy also discussed with Shah the granting of permission for 16 new medical colleges to strengthen the medical system.

Disha Special Courts Bill was brought in to check the crimes against women and children and the Centre should consider the Bill, he said.

The Chief Minister urged the Home Minister to issue a notification for the decentralization of administration by setting up Executive Capital at Visakhapatnam, Legislative Capital at Amaravati, and Judicial Capital at Kurnool and reminded him that the 2019 manifesto of BJP also mention of making Kurnool as Judicial Capital. Girijan University’s permission and compensation for the loss and damage due to the Nivar Cyclone should also be expedited, he told the Union Home Minister.